September 30, 2018
The second-greatest effort I've ever had to put into making a pair of headphones work was, one time I bought a pair of open air AKGs and they needed a more powerful amp so I bought a more powerful amp. I really wanted the B&O Beoplay E8s to work. I put more effort into trying to get these to work than any other pair of headphones, just about any other product, that I've ever owned. I kept using them for weeks even though they were buggy and unreliable and sometimes headache-inducing, but eventually I replaced them under warranty. I tried to like the second pair, but I replaced those under warranty after they developed the same problems, plus a few new ones. I even tried to like the third pair, but they developed an entirely new list of bugs and it was just too much to put up with. The B&O E8's are far too problematic and unreliable to be useful. They never should have made it to market in their current form.


For the record, I bought a pair of B&O Beoplay E8 wireless earbuds about ten months ago. I read that they produced significantly better sound than the Apple Airpods, and sound quality is usually the #1 priority for me. Other reviews published since then show spectrum analyses in which the Airpods produce flatter, more neutral sound than the E8s, but you have to consider that those results come from a laboratory setting. The Airpods are completely open, while the E8s are sealed with foam earpieces. Isolation of road, pedestrian, and construction noise easily outweighs moderately flatter frequency response. So if the E8s actually worked, I would probably consider them to be a very good set of wireless earbuds today, practically superior to the Airpods. However, they don't work.

After a few weeks of ownership, I noticed that the left channel had become much quieter than the right channel. That's a bit odd. After adjusting my LR balance, I did a frequency sweep and found that the two channels produced significantly different results across the frequency spectrum. That's completely unacceptable for a $300 set of headphones. I was just past the 30-day return window, but I could still replace them under warranty. I ordered a replacement. The second set worked as expected for a few days or maybe a few weeks, and then started having problems where they wouldn't turn on or only one earbud would turn on. After a few weeks of this, I requested a second replacement. My third set had the same bugs as the second set: one or both earpieces wouldn't turn on when desired. Sometimes it would take 3-4 minutes just to turn the headphones on. In addition, the third set had problems where audio would cut out for a few seconds every few minutes. On average, 2-3 seconds at a time every 2-3 minutes. That's ridiculous. So enough already, I'm not going to waste anymore time trying to use these things. Tearing them apart might provide some entertainment value, so I'll do that.


First we pry apart the case, which is injection molded plastic covered in fairly nice black leather. One thing you can say about the E8s, on the outside they look better than anything else available today. Inside we have a 3.7V, 560mAh Li-Ion battery, about 1.4x the size of the case battery in the Airpods. I didn't bother to scrape the solder mask off all the semiconductors or trace the PCBs, but it appears to be a straight-forward charging circuit managed by an STM STM32F072x8 microcontroller featuring an ARM Cortex-M0 CPU. We have a lot of passive elements and discrete FETs. B&O uses decent quality gold-plated pogo-pins for all dynamic electrical connections. One surprise is the placement of a single manual button (bottom, opposite the wire connections). It's not accessible when the case is assembled, so I assume it's for debugging or factory resetting.


First, we note that the two earbuds have different sized batteries. Both are 3.7V Li-Ion made by the German company Varta, but the left earbud has the CP1254 at 63mAh while the right earbud has the CP1454 at 90mAh. That's 2.5x and 3.6x the capacity of the batteries in the Airpods. This size difference is presumably due to the fact that the right earbud has to power a second, longer range radio. Both earbuds contain radios that connect them to each other, which are very low powered and have a range of less than one foot. But the right earbud contains a bluetooth radio that connects it to the host device which has a range of 20-30 feet. Combined, the earbuds pull up to 150mAh out of the case, meaning we should be able to get three full recharges. In practice, I never drained the earbuds, using up to 2-3 hours at a time, and the case always ran down on its own before the earbuds did. The case needed to be recharged twice per week when not used.


Both earbuds contain a single driver. I have no idea what brand or model. Does B&O make their own micro-drivers? Both earpieces also contain large inductors, presumably to condition the power going to the drivers. 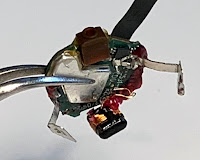 One thing always confused me about the E8s. Both earpieces have microphones. I never found a time where both microphones could be used. Phone calls only take a single audio channel as input. And when using the advertised "transparency settings" where outside noise is added into music so you don't get run over by cars or you can talk to people without removing your earbuds, only the right earbud is affected. Regardless, both earpieces have microphones. Each microphone is a surface-mounted MEMS device covered under a rubber isolating duct, the red object shown here on top. I haven't been able to identify the microphone.


Both earpieces have large capacitive buttons on the outside that sense through the plastic case.


The PCBs of the two earpieces are fairly different. As explained before, the left earpiece has one radio and the right earpiece has two. The left  PCB is outside of the battery, with respect to the wearer. To give a profile from outside to inside, you have the capacitive button, the PCB, the battery, and then the audio driver. On the PCB we can see an uncased piece of silicon labeled "NxH2281A1 PG0X85 10 E D 1747". The fact that it's uncased suggests that maybe it's custom. It must contain the short-range radio that connects the two earpieces, because there are no other ICs that could provide that functionality. We also have a QFN16 IC, which I believe is a Cypress CY8CMBR3108 capacitive sensor controller, and a Dialog DA7217 Codec.


The right earpiece has two PCBs connected by a flex cable, one inside the battery and one outside. On the inner PCB (doesn't have battery tabs) we have another one of those NxH2281A1 chips and another Dialog codec. On the outer PCB we have an even larger piece of uncased silicon labeled "csr 867 0C N7224DY05", which I assume contains our bluetooth radio, and another Cypress sensor controller.

That's everything. I didn't develop any major insights during this disassembly. All the internals were what I expected. I am no more knowledgeable now about why these things are so buggy than I was when they were still intact. I would blindly guess that it's a problem of electrical parasitics or power problems combined with inadequately reviewed and tested firmware, neither of which I can identify with a teardown like this, or maybe immature design in that custom silicon. But the Beoplay E8s are nowhere near as complex as Apple's Airpods, if we measure them on the basis of "how many parts". That's about all I can say. Well, that and don't buy the B&O Beoplay E8s because they're incredibly buggy and unreliable. I hope this was useful or at least entertaining for someone.
audio Electronics headphones