Last time I said that I was pausing the stereo build process because I was considering returning the car due to computer bugs that made it very inconvenient to use. Those have been fixed. It took three months, but my car is finally working as expected so I'm happily keeping it. And so the stereo build continues. I'm trying to figure out how to chop this story into organized pieces. I'm going to write this segment about electronics, another segment about speaker installation, and a final section about subwoofer installation.

When disassembling the trunk in previous segments, I noted that the trunk well liner was very inefficiently shaped. It slopes inward as it goes down, leaving large gaps between the liner and the body, which means it wastes a good deal of storage volume. This is probably to make installation easier, which is perfectly understandable, but there's no reason for me to stick with that. I'm installing my amplifiers and signal processors in the trunk well, so I'm cutting out the factory liner and building my own there to take advantage of that extra space. 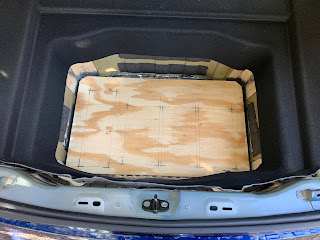 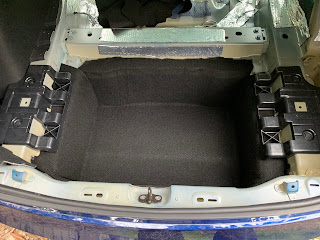 The floor of the well is not flat, so I added in some foam scraps to make it flat and I lined the walls with more foam to protect from vibration. Then I covered that with carpet. The color match isn't good, but this is all going to be underneath a panel cover so I don't care. 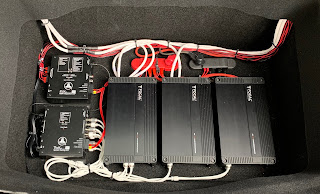 I cut a plywood panel to fit the bottom of the well, I wrapped it in carpet, and I mounted my amplifiers and signal processors onto that. This allows me to assemble and test my power wiring outside of the car, which is safe and convenient. When installed, all of the electronics take up about two inches of depth in the well. A second plywood panel will cover the electronics and act as the floor of the new trunk well when I'm done. I'm using Class D amplifiers (which are highly efficient and produce very little heat), and I've tested them and found that they use <10A continuous at high volumes, so I'm not concerned about cooling. I'll check on electronics temperature during heavy use, but I don't expect it will be a problem. 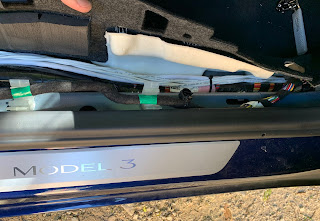 The longest part of this process was figuring out how to hook these machines up. There are two 12V power sources in the Tesla Model 3. There's a 12V battery up front (a regular "car battery") and there's the main high-voltage battery underneath the floor (the "Tesla battery") which contains its own 12V DC-DC converter. Based on what I've read on forums, powering a major load like an amplifier from the 12V battery is a bad idea and it results in lots of error messages about the battery malfunctioning and needing replacement. Powering your amplifiers from the main battery's 12V output seems to be the preferred option. So I connected my power supply line there and I connected my turn-on signal to an unused 12V supply pin in the VC_LEFT computer  next to the driver's feet which turns on and off when the car turns on and off. 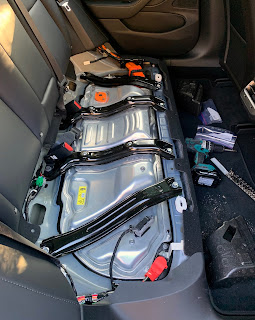 Remove the rear seat cushion to see the "penthouse", which contains the control electronics for the car's main battery. 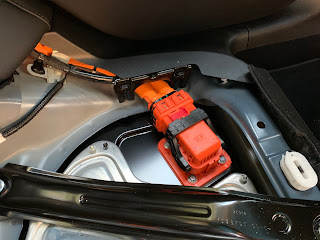 On the driver's side you'll see this very large high-voltage connector. It looks cool. Leave it alone. 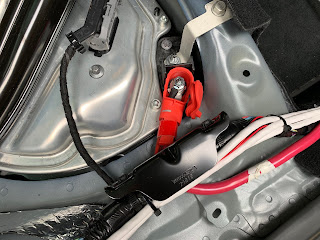 On the passenger side you'll see this red cable with a screw terminal underneath a rubber cover. That's our 12V source.

This arrangement worked well for a few hours. Then I closed my car and went inside for the night. When I went outside the next morning, I had some problems. 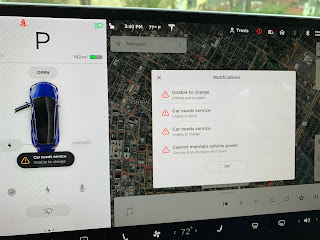 This was undesirable. I disconnected everything and started talking to people online. Everything was hooked up correctly and I didn't know what the problem was. I checked the current consumed by each component and connection. No insights there. I looked for noise in the power signals. Nothing. Long story short, after several days of fruitless troubleshooting, one of my three amplifiers died. The lights would turn on but it didn't produce any sound. The other two were fine. I removed the dead amp and all of my error messages went away. I don't know what was wrong with that one amp, but it appears that that was causing my problems. Ever since then, everything is fine. No more error messages. Then I installed the most recent software update from Tesla.

The most recent update from Tesla does something odd. Instead of turning auxiliary loads off when passengers exit the car, it leaves them powered up for about an hour afterward and then shuts them off. This means that my turn-on signal and therefore my entire audio system remain powered on for an hour after I park the car, pulling 65W out of the battery. I don't want this to happen. So I switched my system from remote turn-on to audio signal turn-on. This means there's a delay of several seconds between playing music and hearing sound from the speakers when you first turn the car on, but it's not a terrible inconvenience. I might consider using interior lights or some other system as a turn-on signal instead. We'll see. 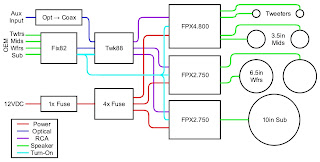 So here's the current system setup. It is converging, the design changes are getting smaller and smaller, let's hope it stays that way and it soon becomes stable.

I replaced the bad amp, as I said, and for a few days I didn't get any error messages. Then I started getting the same error messages all over again. I tested the car's response to small current draws by disconnecting the stereo completely and connecting resistors, leaving those to sit overnight. I tested 14kΩ (1mA), 4.7kΩ (3mA, and 1.4kΩ (10mA), and the 12V outlet never tripped. I never got any error messages. So I would guess that intermittently some part of my system is pulling larger currents, some nonlinear behavior where something decides it needs to recharge periodically.

Since I don't know what actual problem is much less how to fix it, I decided to go with an easy catch-all solution. I installed a solid state relay between the HV battery's 12V outlet and my stereo system. It's controlled by the trailer turn-on, so the stereo is completely powered down and isolated from the car's power systems when the car is turned off. So far, so good.