August 18, 2013
I have a big block of syntactic foam sitting at work. My idea is to use half of it on the ROV body and the other half to lift the tether and make it as close as possible to neutrally buoyant. The ROV is pretty small and won't have a ton of inertia, so I don't want the tether to drag it down, especially since the tether is going to be fairly long. To do that, I'm going to make lots of small beads that string along the cable. "Lots" means about 1000. It's not something I'm going to do by hand. I tried a laser cutter and a waterjet, but the laser cutter wasn't powerful enough to cut through a 0.5" plate (and I'm not sure whether or not syntactic contains chlorine, which is bad for the laser) and the waterjet was too expensive. So I decided to go with CNC milling. It's definitely the slowest method, but it can do just about anything.

I made some drawings of the final product, a sheet of beads cut from a half-inch plate, using Solidworks. I turned that into CNC toolpaths using HSMWorks. This was my first significant CNC milling work so everything was new to me. I used a small Tormach 3-axis mill. At first I wanted to use a 1/16" end mill to reduce waste, but quickly realized that was a bad idea. I bought a carbide end mill, 1" long, and it broke after about 10 minutes. The machine was going slow and I didn't know what the problem was, so I decided to do a bit of reading about micromachining. It turns out I was doing just about everything wrong. I was using a 4-flute end mill when I should have been using two flutes to help clear the abrasive waste material out of the way. I was using carbide, but I should have been using high-speed steel because it's much more flexible. I reduced the feedrate to 30"/min to reduce the stress on the end mill. I should have increased it to 60 or more, because chip size doesn't decrease along with the size of your mill. If your feedrate is too low, the mill will just rub against the surface instead of cutting. I was also using liquid coolant, but I should have been using air, because with a granular material like syntactic foam, liquid coolant just creates sludge. After learning all that, I found an air hose and redesigned the plate and the toolpath to use a 2-flute, 1/8", HSS end mill.


The first plate still shattered. My fixturing and toolpaths were not ideal. The mill was cutting from the outside in, focusing the stress on the weakest parts of the plate, and the vices were causing the plate to bow upwards, making the tabs that hold the beads in place nonuniform and far too thin. 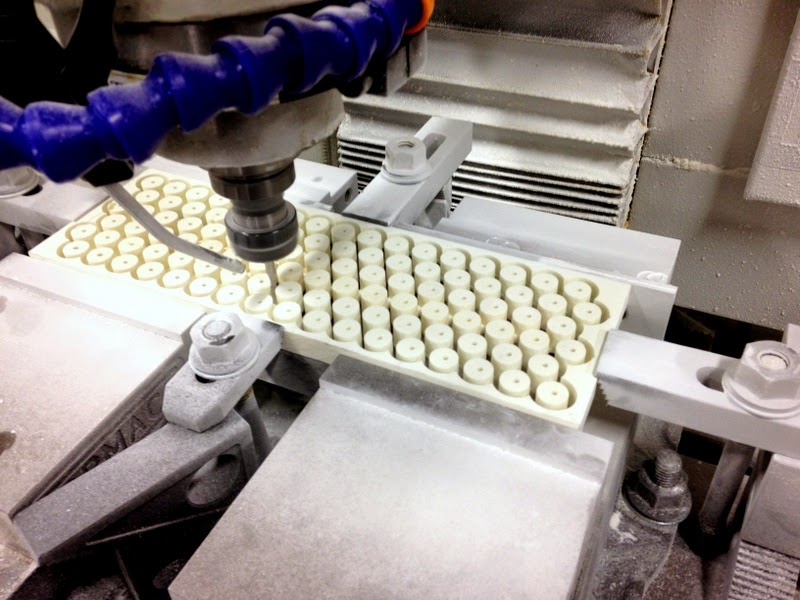 Some additional fixturing solved the problem and I milled the next plate without any major trouble. Of course all this fixturing was a pain to set up each and every time, so I found a scrap of 3/4" plywood and created a frame.


I would have used metal if I had had a large piece lying around, but I didn't, and this works just fine. The frame keeps the syntactic plates from bowing and makes fixturing easy. 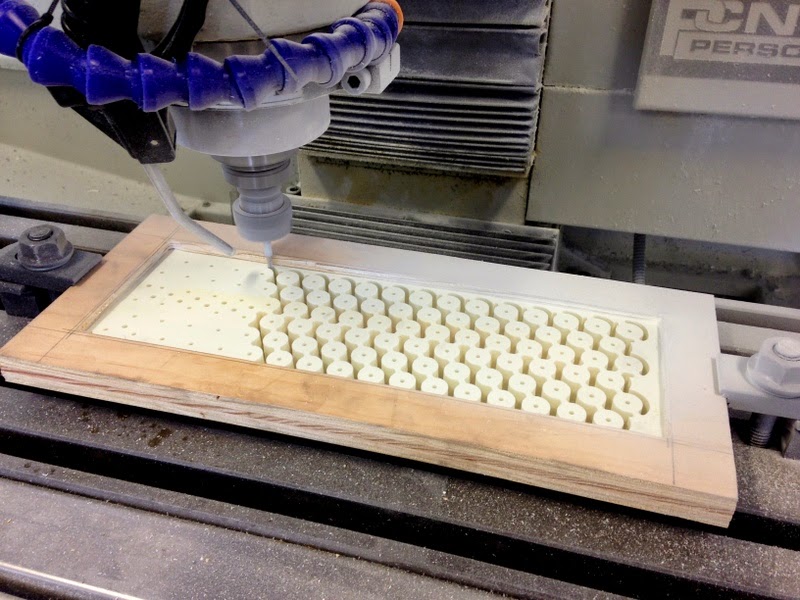 Now the whole process is pretty quick and painless with minimal operator interaction. Each plate takes about an hour to make and yields 102 beads. I need 10 plates to float the entire tether, so that means eight more hours of sitting in the machine shop. I can handle that.
Ballast CAD CNC Milling syntactic foam Tether