September 03, 2013
My plan for motor control is to use hobby airplane Electronic Speed Controllers. They're small, light, and cheap. The problem with them is that an airplane propeller only turns in one direction. Airplane ESCs don't have direction control. I could use ESCs designed for cars instead, but those are larger, heavier, much more expensive, and are typically designed to handle 30-40A minimum. My motors draw <= 0.6A. Overkill. My initial idea to provide direction control for my airplane ESCs was to put H-bridges in between the ESCs and the motors to switch two of the leads when I wanted to switch direction. The problem with this design, which I didn't realize at first, is that as the ESC rotates through the three phases, current travels both directions along each lead so I couldn't use a single bridge. I would have to use two separate bridges for each lead, which would take up twice as much space, cost twice as much for parts, and I didn't know for certain that even that would perform well. I'm not exactly a pro with transistors, at least not yet. I decided to go back to square one.

Instead of switching the power leads, I could just switch the gate signals on the existing MOSFETs. Gate signals only travel in one direction and I could use logic level transistors instead of power transistors. Of course that also meant I would need to learn how to design PCBs and solder SMD components. Simple enough. 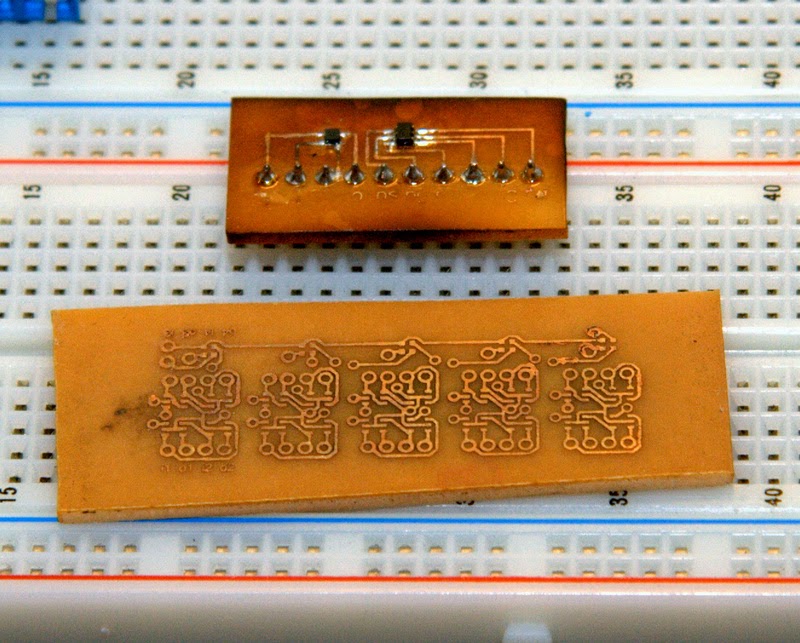 This was my third or fourth revision of the switch circuit. Each block contains one MOSFET driver and four N/P half-bridge MOSFETs. Each block switches the driver signals for one ESC so this circuit would cover all five motors. And it would be tiny, about 2cmx6cm. The only downside is that it will be a pain to connect it to the ESCs. Switching two phases means switching four signals which means connecting eight wires. Multiply that times five motors and you're spending a lot of time working under a magnifying glass. Still, I thought it was worth trying out. That's still much better than the alternative. 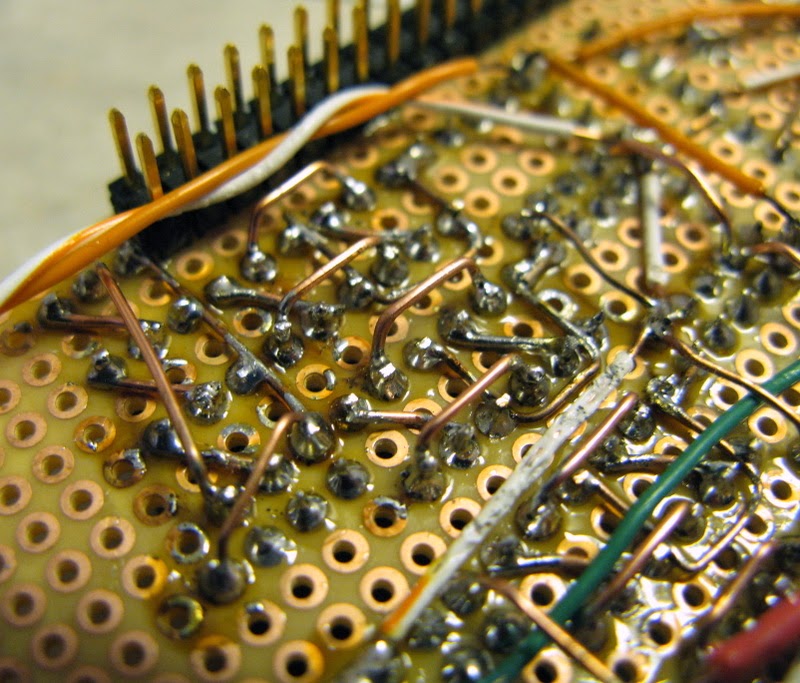 (The alternative)
I made breakout boards for the SMD components and etched the switch circuit. I used toner transfer to draw the circuits and etched the boards with HCl and H2O2. It took a while for me to figure it all out, but at this point I can make a PCB in half an hour without any major problems. I'm attaching the components with solder paste and a hot air gun. As you can see the PCB gets a little toasty, but it's fine. Testing everything out, it looks like the bridges will work without pullups, pulldowns, decoupling caps, or anything else. Great.

The next part was seeing if I could actually connect the switches to the ESCs. For this I had to sacrifice one of my controllers. I desoldered and removed the power MOSFETs for two of the phases, bent the gate pins upward, then soldered them back on. Then I soldered 30awg wire onto the gate pins and the pads where they used to be connected, allowing me to intercept and switch the gate signals. It's a fairly time-intensive process, so if I can think of an easy way to avoid this entirely, I'll do that instead. And, of course, it there's a way to do this with fewer than 40 wires, that would be nice too.

The next step will be to connect everything and see if this design actually works. I'm also going to see if I can map out the traces on the ESCs so I can switch the signals that activate the drivers instead of the signals that activate the MOSFETs. Why switch four signals if you can switch two? Half the components to use and half the wires to solder. I just have to figure out how to tap into that spot on the board.
circuit design Electronics etching PCB Motor Controller soldering