I Finally Have A Complete Tether

December 26, 2013
Over the past few months I've put an enormous amount of work into creating a thin, flexible, inexpensive, neutrally buoyant 500-foot tether. I'm glad to say it's more or less complete. To be honest, it could have been complete months ago. All the parts have been piled in a corner since about September. Now that I have some free time, I finally got to assemble it all. The first thing to do was balance the tether; by "balance", I mean make neutrally buoyant. I designed my syntactic foam beads to make the tether perfectly neutral when spaced every six inches, but you never really know whether or not your design works until you test it. I strung four hundred beads onto a 200-foot length of cable, wound it all up, and threw it into the bathtub. It was almost perfect. Awesome. The tether was very slightly positive, so I took a few beads off, added a few back on, and so on until I decided that the difference between 396 and 400, when spread out over 200 feet, was negligible. 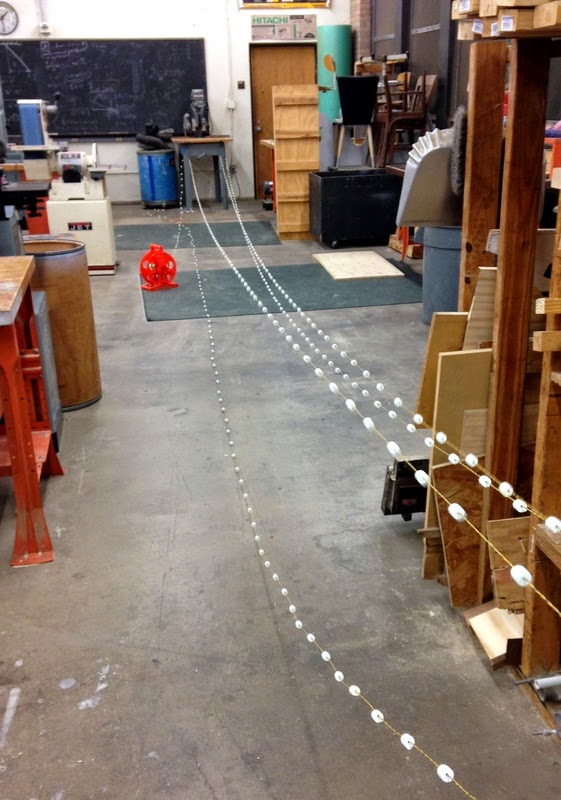 The next, much more tedious step was spreading those 400 beads evenly across the entire cable and fixing them in place. I brought the bundle to the workshop, strung it back and forth across the room, and spent an exciting afternoon spacing beads. I stretched a tape measure along the cable to make things a bit easier. I'm not completely insane. After spreading them out, I glued the beads in place, one by one, with super glue. Cyanoacrylate is almost completely non-toxic after it dries, so I don't have to worry about putting it in the ocean.

Originally I thought I would assemble the entire 500-foot tether at once, since I have enough syntactic beads cut to do it, but at this point it's just unnecessary. This is a time-intensive process and the deepest water I have nearby is Lake Travis, currently about 100 feet deep where I dive. So I decided to do the first 200-foot segment and call it a day. I cut off the remaining 300 feet and wrapped it up for later. 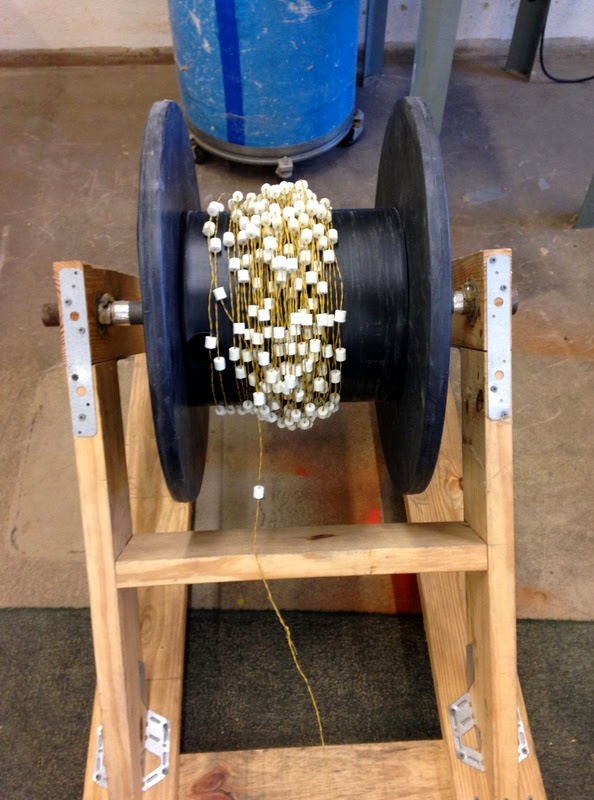 So now I have a complete, neutrally buoyant tether. Total cost, $60 for cable, $30 for an endmill, $5 for a reel. Everything else was found or donated. I've tested it on dry land and I can communicate over it just fine. The next step is to put it in the water. It's going to float ever so slightly, which is good, because I'm worried about the syntactic beads getting tangled on the bottom. If I have problems with that, I'm going to remove some of the beads and coat the tether in woven polypropylene rope. That will be another long, tedious day in the workshop, so hopefully that isn't necessary.
ROV syntactic foam Tether