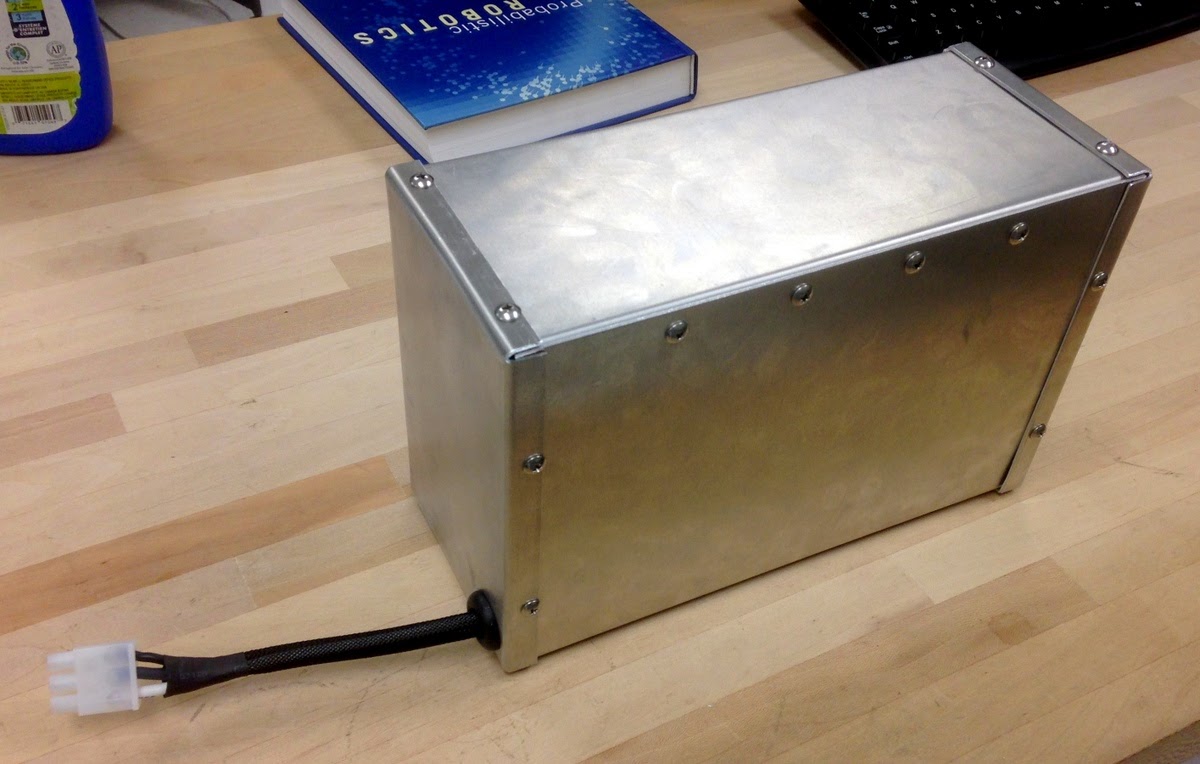 The whole point (or at least the main point) of Rocky, the robot I'm currently building at UT, is that it will be able to travel beyond the confines of our lab, well beyond its predecessors. Our two previous vehicles used cable tethers, but I'll need a mobile option. (Our previous bots were designed for lead acid batteries, but ended up needing tethers) Rocky is going to consume up to 1200W and Dreamer, mounted on top, could consume another 600+. That's pretty serious power, so we need some serious batteries. Ideally I'd like to buy something off the shelf, because I want this machine to run during my lifetime. Lead acids batteries could easily provide 1500-1800W @ ~50V, but they would roughly double the weight of the robot, and that is undesirable to say the least. Lithium Ions (LiCoO2) have fantastic energy density, but memory effects, safety concerns, price, and low power density make them more suitable for electronics than for motor drivers. Luckily, right in the middle sits lithium iron (LiFePO4). Significantly higher energy density than lead acid plus higher power density, less memory effect, and better stability than Li-Ion. Good all around. 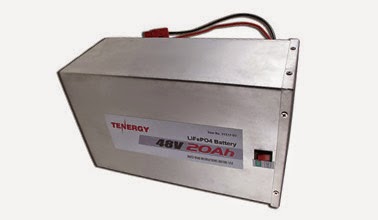 We found a few high capacity LiFe packs on the market. Tenergy makes a 48V, 20AH pack that is exactly what we wanted. It's durable, self contained, and within our budget. Unfortunately, Tenergy wouldn't sell them to us. They only sell them in bulk, a few hundred at a time. We wanted to buy two. Luckily for us, Tenergy has a commercial side and a hobby side. All-battery.com stocks a pretty wide variety of cells, chargers, management circuits, and connectors. It also turns out that a stack of 16 of these hobby cells would have dimensions strangely similar to the industrial battery pack above. It's almost as if they're the same thing. So we can buy the hobby parts and assemble them ourselves to make the industrial packs. It's not exactly ideal, but it still beats lead-acid. 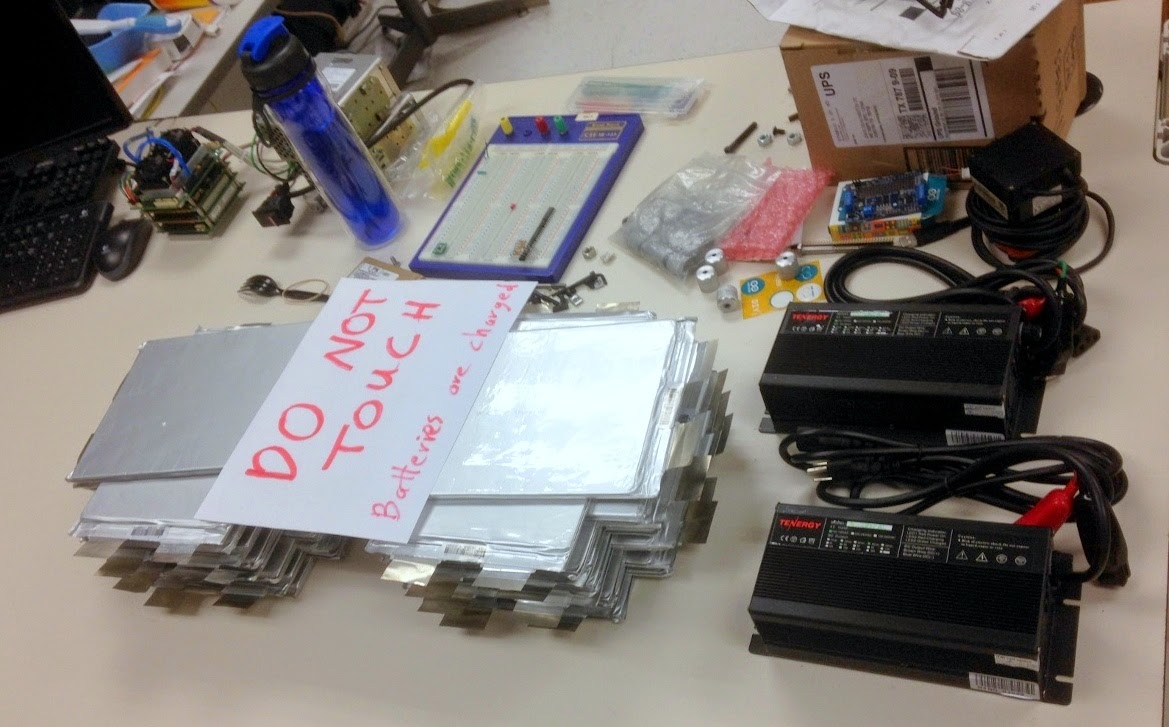 After about a month of waiting (They forgot to ship our order, but did remember to charge our credit card. How nice.) we finally got everything. I was quickly reminded that, unlike lead batteries, LiFes produce a more or less constant voltage until they die. I burned one or two of the terminals when unpacking them. Unlike their cobalt-based brethren, LiFes aren't prone to exploding when shorted, thank goodness. The only significant downside to LiFes is that, like all lithium batteries, each cell has to be charged individually. You can't wire them in series and just connect a voltage source like you can with lead. No biggie. We bought battery management boards to take care of that. 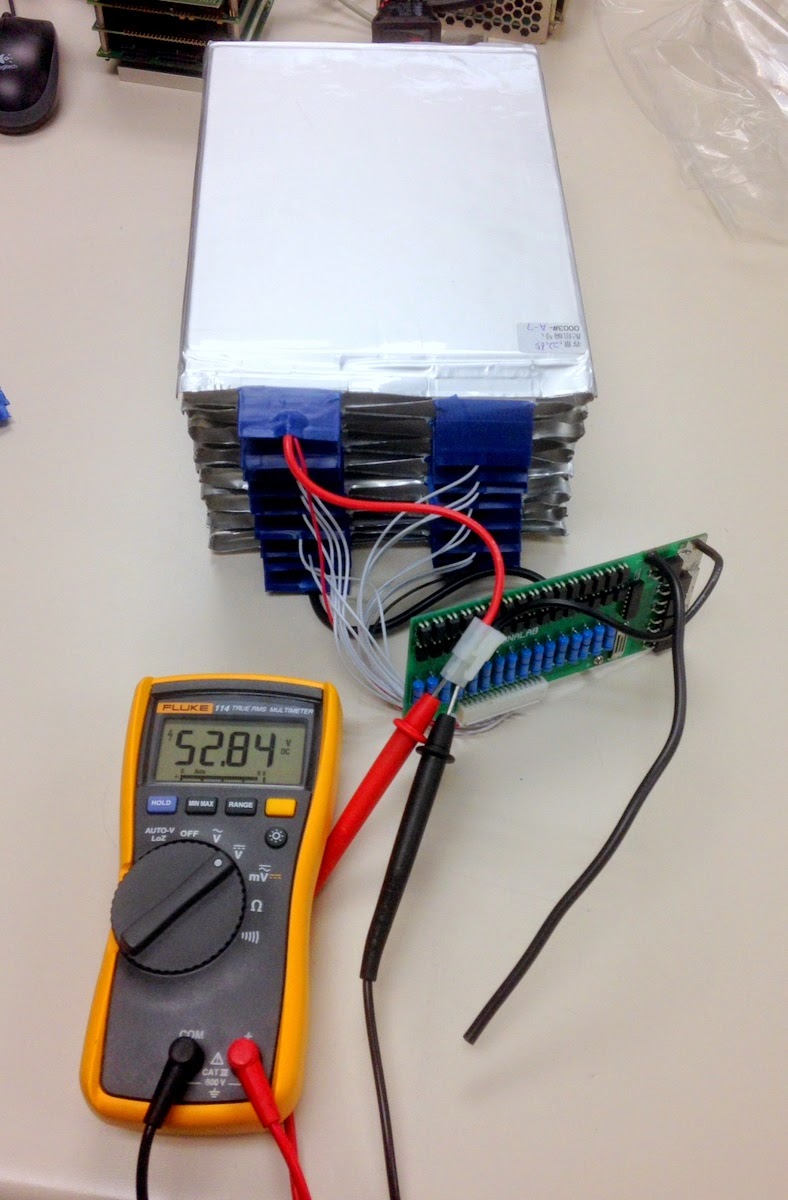 After wiring everything up, we can read 52V and everything looks good. The charging cables are soldered on (normally soldering batteries is a very bad idea, but these have isolated tabs for exactly that) and everything is wrapped and insulated. Now we need a way to transport it all. Carrying a 25-lb. stack of semi-flexible cells with a PCB hanging off the side is awkward. Let's build a box. Aluminum should work nicely. 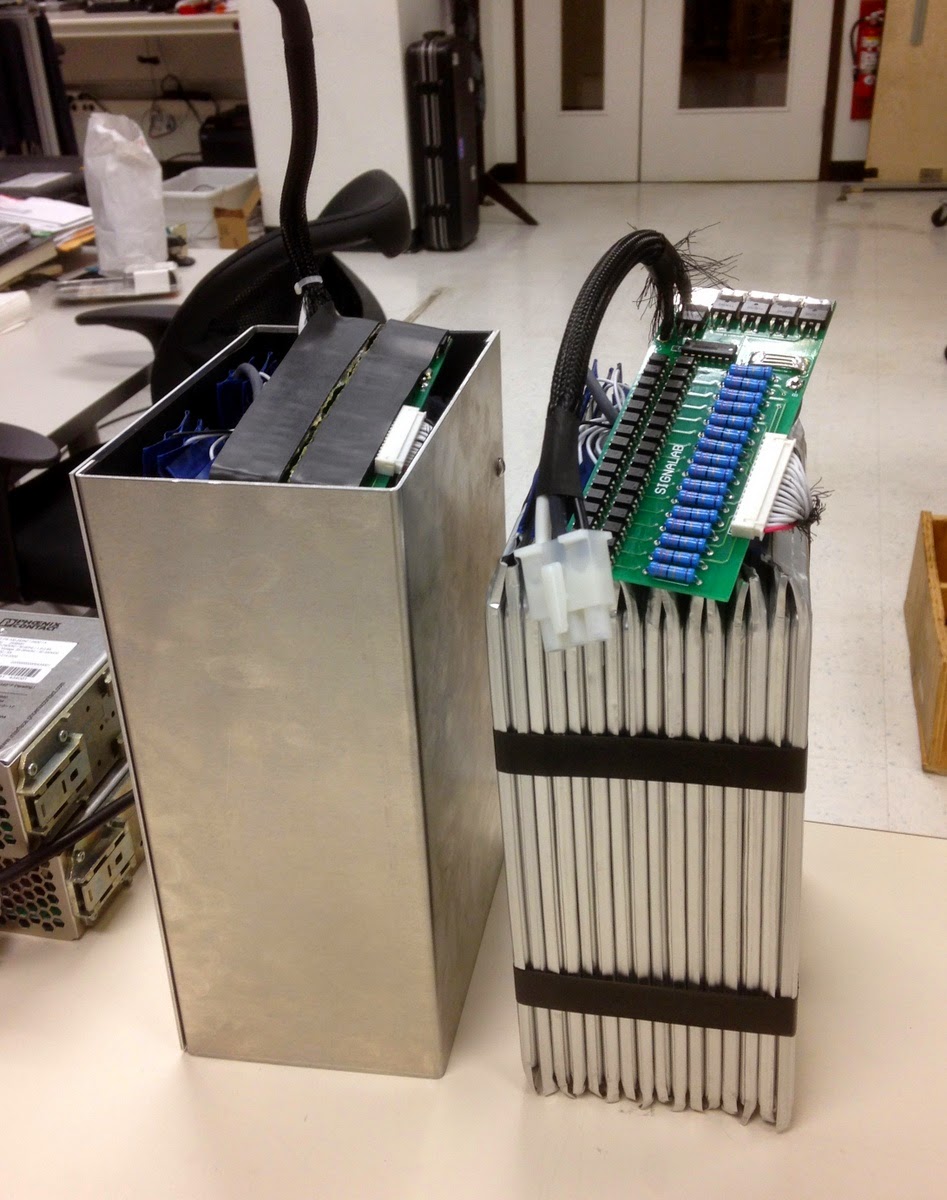 I folded some plate aluminum to make boxes, lined them on the inside with adhesive-backed rubber sheets, and screwed them shut. The only thing coming out is a short cable with three leads: one positive, one negative for draining, one negative for charging. Assuming nothing goes horribly wrong, I should never have to open these boxes back up. So here's my final product: a box containing 3.8 megajoules of electrical energy, capable of delivering up to 20A at 52V. As far as I know, my battery packs are roughly identical to Tenergy's. I'll be installing two of these in parallel on Rocky very soon. Fingers crossed.