May 25, 2016
Long story short, I have Windows 10 installed on my Macbook Pro because occasionally I have to run two programs that only are available for Windows. A few weeks ago I started getting error messages saying Windows could not run auto update because there was no room left on the hard drive. I gave Windows 10 a 50GB partition and somehow it managed to fill it up with .... something. After some digging I found out Windows had never deleted any of its temporary files for past updates. WTF Microsoft. That's resource management 101. After deleting 20GB of unneeded temp files, auto update could run again and I was treated to an hour of this: 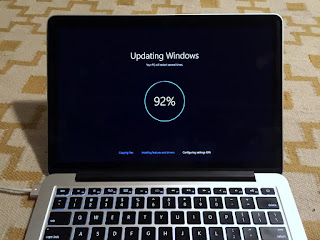 Six years ago I switched to Ubuntu for programming and OSX for everything else. They're both terrific. Why does Windows still suck so bad?
Windows 10