November 09, 2016
Grad school is time consuming. I haven't touched my chandelier since August. However, in August I made some good progress. I threw away all the strings of lights I had made previously. The final cables will have to be 20 feet long, and with the problems I was having untangling eight-foot strings, I knew I had to change something. So instead of continuing to run three wires straight and parallel, I decided to braid them together. I can't do the normal rope-making technique of just twisting them together because thin copper wires with no jacketing would unwind very quickly. They have to be actually braided. So I built a braiding machine. 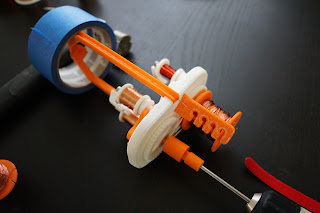 Herzog Machines have been used to braid ropes for a long time and they look like nightmares but they're actually not that hard to build. I 3d printed a Herzog machine that can carry three bobbins at a time, which is all I need. Originally I planned on using inexpensive stepper motors to drive it, but then I realized I could make it work with only one motor, so I just hooked up an electric drill. It works very well. It's limited by the friction of the plastic pieces sliding against each other, so I can braid about one inch per second, so one length of cable every few minutes. Totally bearable. It's reliable enough that I can start it running, walk away, and check in every five minutes. 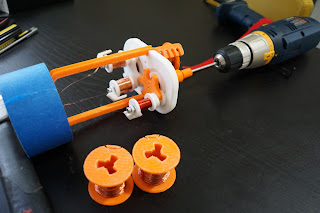 The cables produced are terrific. The braiding is very tight and consistent, and just loose enough that soldering LEDs onto them is easy. Also, we have experienced no signal problems using the new 20' cables. Everything appears to be working well. Now I just have to mass produce 250 more strings. 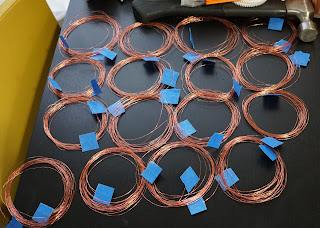