June 02, 2017
I'm very tired, so this is a preliminary write up. I'll make a more comprehensive article later if I have time. It's taken about 18 months, and there have been many starts and stops along the way, but my (parents') chandelier is finally complete and installed. The final installation is significantly smaller than the original concept, which I begrudgingly admit would have overwhelmed the room. However, it's still very nice. 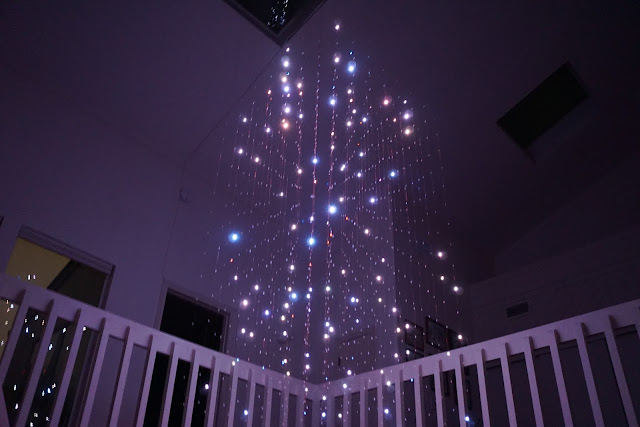 The final product is 4'x4'x8' and contains 1024 LEDs in an 8x8x16 grid. Currently, it's set up to show the stars visualization I wrote well over a year ago, which is significantly less anxiety inducing than the full-speed rain program I was running previously ("full-speed" meaning actual, real-life rain fall speed, which is about 20mph). I still haven't gotten around to networking all the MCUs together, which means the various clusters can't communicate with each other, which means I can't run programs that cover the entire chandelier. I might never get to that at this point, but if not then at least stars is a nice stopping point. Grad school and the job that actually pays me will continue to consume most of my time for the foreseeable future.


I put up scaffolding to reach the 27' ceiling, which took half a day on its own.


The design I had been preparing for the past several months was built around hanging ceiling "tiles", rectangular panels that held 16 strings in place. They were very easy to install and repair. However, once I actually put the scaffolding up, I found that there was no way to hang the panels such that they were not blocking a skylight. I had not previously measured the exact positions of the skylights, and I thought they were several feet away from where they actually are. 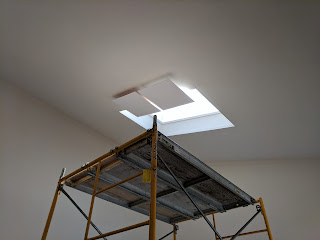 So this definitely was not going to work. I disassembled the panels and went back to the previous plan, which was to mount the strings from cables that are stretched across the surface of the ceiling. 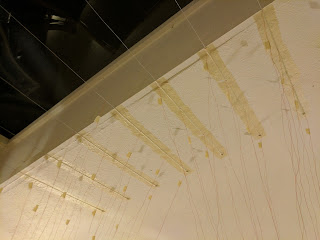 It was so neat, clean, and organized before, when I was using the pre-built panels, and now it's a horrible mess. 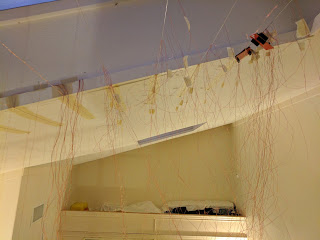 Anyway, after several days kneeling on top of the scaffolding, everything was more or less assembled, tested, and ready to run.


And eventually, after a lot of tweaking and debugging and repairing, it all worked and I took down the scaffolding. Here are a bunch of pictures.


Overall, I'm happy with the results. Currently I lack the core functionality of the original concept, which was the ability to draw continuous images across the entire chandelier. That will require me to upgrade the control electronics, networking all the MCUs together so they can communicate in realtime. This isn't difficult, I just haven't had time to complete it. However, the original concept also required a 16x16x16 cube, and the swarm visualizations I originally planned just don't look the same in an 8x8x16 space, so there might be no point in "finishing" the electronics. We'll see. We're quite happy with the results, and I think a higher-energy visualization would be exhausting to watch day in, day out, so the current stars program might be optimal after all. So I won't declare this project to be completed and closed, but I won't be surprised if it stays in its current form.
blackbody colors C Carpentry chandelier circuit design code construction Dallas Electronics embedded computing herzog LEDs lighting MCU realtime software soldering TI Launchpad