November 20, 2017
So I recently got an iPhone X, my first no-headphone-jack phone, and I threw together a pair of Etymotic ER4SR earphones with an Apple lightning connector in order to save a marginal amount of size and moderate amount of convenience. The problem with that solution is that the lightning connector sticks straight out of the bottom of the phone, instead of at an angle like most headphone mini plugs, and with the heatshrink tubing I put on it it sticks out a full two inches. No good. I could get some fancy, more flexible silicone heat shrink tubing and do some cool stuff with adhesives and potting materials and what not, but I had no desire for this to turn into more than a 2-hour project. So I decided to try out wireless options. It's 2017. I have a wireless charger for my phone, why not wireless headphones as well?

I tried a pair of a friend's Apple Airpods, but the sound quality is just not very good. Despite costing $160, they sound only slightly better than the earbuds that are included with the iPhone, and those are surprisingly bad. The bass is muddy and overwhelming and the mids and highs lack definition. After using Etymotic ER4-series earphones for the past ten years, there is no way on earth I can go back to those. So knowing that there are many other wireless earbud options out there but not knowing what any of them are, I decided to try out the low end and high end.

Make sure you read all the way to the end before buying anything. 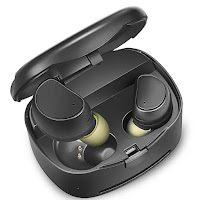 I bought these as a baseline. These are the cheapest fully wireless bluetooth earbuds available on Amazon.com with at least a four-star average. Soundmoov doesn't even appear to have a website, but they sell bluetooth earbuds with a charging case for $37. And you know what? They sound better than the Airpods. They genuinely do. They have decent clarity from low to high and actually pretty good, not-muddy bass. Their highs are not very impressive and there's basically no sound staging, but I don't expect either of those at this price point. All of this is probably not because they have better hardware than the Airpods, but merely because they use sound-isolating silicone earpieces instead of hanging in the ear lobe, pointing the speaker approximately toward the ear canal, and hoping a significant portion of the sound goes in like Apple's earbuds do.

The downside is that they're really uncomfortable. Seriously, I can't wear them for more than an hour. The sound tubes are larger in diameter than those of any other earbuds I've ever seen and they more or less poke through the silicone earpieces and exert pressure on points in your ears. Not great. Still, if you want dirt cheap wireless earbuds that actually sound decent for short sessions like walking between places, these are a totally decent option. 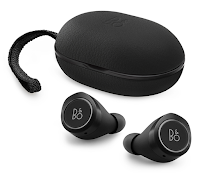 The Bang & Olufsen E8's are the highest quality earbuds I could find. Beyerdynamic is making a set of cabled bluetooth earbuds, but that's really not wireless at all. Also they're not available in North America so far. Etymotic used to make a cabled bluetooth set, the Ety8, but they discontinued it several years ago after a very short run. Anyways, the E8's are very nice. They're not in the same league as my Ety ER4SR's, but they're very good. Clarity is good, end to end, nothing sounds muffled or distorted. Bass is smooth, clean, and natural. Sound staging and voice separation is okay, though mid-range instruments tend to blur together. High end seems a bit weak and not as sharp as I hoped, but it's not bad. They also come with three sizes of silicone eartips and one set of foam eartips. Just like with my Etymotic's, the foam tips seal perfectly and can be worn for hours with no discomfort.

So all around, the B&O E8's are terrific wireless earbuds. The only downside I've found so far is that the charging case started to come apart on the very first day. Just a few hours after I opened the box, I noticed that the lanyard was starting to come loose. By the end of the day it was completely off. I don't care about that specifically, honestly I probably would have cut it off myself, but to have it fall off after a few hours is a bit disconcerting. 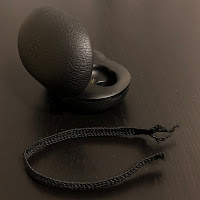 So that's it. My iPhone X is now completely wireless. I charge it using a Qi pad and I play music through bluetooth earpbuds. It's pretty nice. Apple, just as a fashion statement, why not make the next iPhone with no ports at all?

The B&O earbuds were great for about three weeks, then suddenly the right earbud started to change. Over the course of a few days it dropped to about half of its original volume. When your left and right speakers are playing at completely different volumes, it's awkward and disorienting, making the earbuds more or less useless. That combined with the problem above where the case started to fall apart on literally the first day means I can not recommend this product. I don't think I've ever bought anything from B&O previously, so I have no idea whether or not this performance is normal for them, but regardless it's not good.

I got a replacement set under warranty. So far so good. When I do tone tests they sound perfectly balanced throughout the spectrum. The overall sound profile is a bit different from the first set, however. It's a bit more muffled and it definitely has the unnecessarily heavy bass that consumer headphones have nowadays. The included equalizer flattens the spectrum out pretty well.

After 10-20 hours of use, the replacement set is also having problems. Probably one out of every two times I try to turn them on, they don't turn on. The power sequence is pretty simple. Press the right button (the instructions say press right once, but actually you have to press it twice, both pairs behaved this way), and then the right earbud beeps twice, and then both earbuds beep twice. About a quarter of the time, the right earbud beeps, but the left never does. About a quarter of the time, neither of them beep or the right one beeps once and then stops. There is no way to turn the headphones off, except to put them back in the case, so this means you take them from the case, put them in your ears, try to turn them on, fail, take them out of your ears, put them back in the case, wait a few seconds until they reset, take the them out of the case, put them back in your ears, try to turn them on again, and sometimes repeat this process multiple times. Seeing as the entire point of this product is convenience, this is ridiculous. The B&O E8 wireless earbuds are the buggiest product I've ever seen make it to retail and I don't recommend buying them.
audio bluetooth iphone