Feet (for a typewriter)

August 02, 2018
A long time ago I bought an old typewriter, a Remington-Rand Model 5 Streamlined. About 150,000 of them were made between 1935 and 1940, so they're pretty easy to find. Overall mine is in very good condition, a few mechanical problems that were easy to fix, but one major problem was the feet. Not surprisingly, the natural rubber feet dried, hardened, and disintegrated over the course of 80 years. So ten years after first thinking "I should fix that ...", I'm fixing it.

The original feet are hopelessly warped, smushed, and cracked, so it's a bit difficult to know exactly what the replacements should look like. Luckily the top half of the foot was covered in a form-fitting metal shell, so I can directly measure that portion. The dimensions of the bottom half, serving only to support the typewriter's weight, don't matter exactly. So I drew up an estimate of the original shape, printed molds for it, bought some urethane, and made some replacements.

It took a few iterations to get it all right. I modified the mold dimensions, realized I should be using a release agent, opened the top and added a small riser so we don't need a vacuum chamber, and ended up with a replacement foot that looks fine and works as desired. 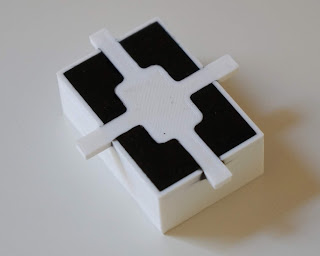 The final process is fairly simple. Coat the two mold pieces with a release agent. I didn't feel like buying a bottle of silicone spray for something this small, so I used chapstick. Seriously, Burt's Bees chapstick is beeswax, which works just fine. Fill the bottom half with urethane, insert the top half, and come back tomorrow. Pull the halves apart, remove the casting, and trim off the flash. That's it. You now have a replacement foot.