September 30, 2018
Last year I decided to put an Apple Lightning connector on my Etymotic ER-4SR earbuds before being unsatisfied with the build quality and buying a pair of B&O E8 earbuds instead. But since the E8s are useless, I decided to go back and finish what I started with the Etys. Originally I just wired the parts together and covered them in multiple layers of heatshrink tubing. The result was usable but awkward. The plug was far too long and I was always afraid that I was going to bend or break it. The heatshrink surrounding the wiring was very stiff, but it was just a friction fit and I never really trusted it for strain relief. But I have a 3D printer that can print molds, and I have two-part polyurethane left over from previous projects, so I decided to just print and mold a new plug that should be just as durable and should last just as long as all the other parts of the headphones. 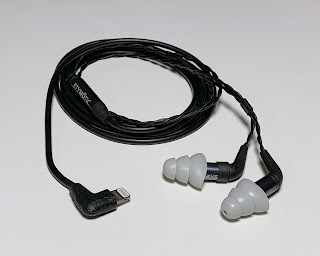 I briefly analyzed the Apple Lightning DAC in my previous post, though for some reason I didn't actually write down the wiring configuration. Here is it.

Now that we know that, I modeled the DAC, made a fairly generic form to surround it, then made a mold for that form. I also printed a collet that I super glued over the end of the Ety cable, because I don't trust the urethane to adhere to the cable permanently and I wanted more reliable strain relief.

I printed and filled a few test molds before I was happy with the results, then I wired up a DAC and made the final plug. Looking at the final product, there are a few optimizations I might make if it comes apart. But so far everything looks good. Hopefully this will last a while.
audio Electronics headphones Molds printing