A Roadtrip to the 1%

January 17, 2019
Earlier this month I took a trip from my home in Austin out to Big Bend, Texas in my Tesla Model 3. I've had the car for three months now and I've done a few long distance drives, but nothing that really counted as a roadtrip and I was curious to see what it was like driving the car on a long trip that would require multiple charges. Tesla says 99% of the US population lives within 150 miles of a supercharger, but Big Bend is in that last 1%, so it was bound to be interesting. 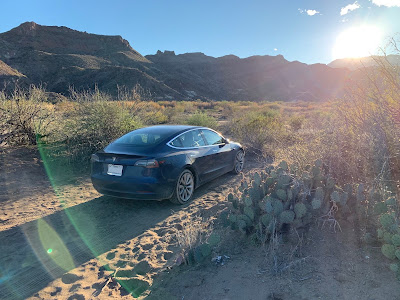 Originally I planned to go to Big Bend National Park, but due to the federal government shutdown I switched to the adjacent Big Bend Ranch State Park instead. I loaded up the Model 3, which comfortably held three people and their camping and hiking gear, and set out. Getting to the park was pretty effortless, as expected. I drove for a few hours, then I stopped at the Supercharger in Junction, TX. I drove for a few more hours, then I stopped at the Supercharger in Ozona, TX. I drove for a while longer, then I stopped at the Supercharger in Fort Stockton, TX and let the car charge to almost full while we grabbed lunch. Then I drove the last 170 miles down to the park. All in all, it was pretty uneventful. The trip took about nine hours, which included 90 minutes of charging. An ICE vehicle would have taken about an hour less, assuming the driver doesn't stop for lunch.

Once I got down to Big Bend Ranch, I took the Model 3 to an RV park in nearby Lajitas, TX. The RV park employees were friendly and receptive, and apparently plenty of Tesla drivers have stopped there in the past, so I left it there to charge overnight via a 14-50 plug. I went back to the RV park the next morning, picked up the car, and had no problems driving it around the Big Bend region over the next few days.

Driving back to Austin was where things got interesting. The day before I left, I drove over to Big Bend National Park, where I originally planned to camp, and charged the car at the RV campsite there. Then I drove back to my campsite in Big Bend Ranch State Park, a distance of 75 miles. I planned to drive straight from there back to the Supercharger in Fort Stockton, an additional 170 miles, the next morning. The car has an advertised range of 310 miles, so 245 shouldn't be a major problem. Except it was. I left Big Bend National Park with 300 miles on the battery, and 75 miles later I was down to 180. It is important for drivers to understand that the advertised 310-mile range is at 55mph. At higher speeds, aerodynamic drag increases as a square and range decreases accordingly. Still, I drove below 65 the entire way and I was pretty surprised to use almost double the expected energy. I'm guessing it was a combination of the hilly terrain, the cold weather, and the high winds.

Even at low speed and with luck on your side, attempting to drive 170 miles with a battery reading 180 miles is a bad idea. Doing that in the West Texas desert is a really bad idea. So I went back to the RV park in Lajitas to charge there for an hour before starting the drive to the nearest Supercharger. With my range now up to 210, I set out for Fort Stockton. I kept speed at 60-65mph, below the speed limit of 70-75. Still, by the halfway point I was getting warnings to "Reduce speed below 55mph to reach destination". I decided to make a detour to Marfa, which was 40 miles closer. The wonderful El Cosmico in Marfa had Tesla destination chargers, which they generously allowed me to use for free. After two and a half hours, I had enough charge to make it to the Fort Stockton Supercharger with a reasonable safety margin.

I kept the speed below 65mph again and I made it to Fort Stockton as expected, where I charged for an hour before heading to the Ozona Supercharger. The car recommended making a final stop there, before heading straight back to Austin, skipping the Supercharger in Junction. But by the time I got to Junction, I already had warnings advising I reduce speed below 55mph, on an interstate highway where the speed limit is 80, so I stopped and charged in Junction for another 20 minutes before starting out on the last leg of the drive home. I arrived in Austin at 2:30am with 15 miles left on the battery, eight hours later than expected, having made three unplanned charging stops.

All in all, the trip was pretty good. The drive to Big Bend from Austin was uneventful, as expected, and the drive back was more complicated, a bit more so than I hoped for. I knew that this was the type of trip that would have been easier in an ICE vehicle, but the goal was to see what it would be like in the Model 3. I planned distances that were right at the edge of the Model 3's range, so the multiple unplanned charging stops were undesirable, but not unexpected. We were a bit anxious at times and I quickly learned not to trust the car's range estimates, but we always had options, we never ran out of power, and we were never stranded or had to call for help. Aside from the trip back being much longer than expected, the whole process was very comfortable and pleasant. Autopilot made the 1400 miles of driving pretty effortless. USB music kept everyone entertained even when we had no cellular service for hundreds of miles at a time. Everything worked out pretty well.

Driving on the Supercharger network in 2019 is relatively fast, easy, and reliable. Driving off the network requires a good deal of planning and preparation, and I wouldn't recommend it for everyone. But it's doable. The existing Supercharger network was built in only seven years, the US network is expected to double in the next year, and new sites are coming online daily. It's also useful to remember that almost every RV park is also an EV charge site, albeit an expensive one. All in all, I'd say this was a pretty successful experiment.
car Model 3 Supercharging Tesla travel