January 06, 2019
Update 2019-05-31:
A summary of this entire project is available in Part 9. This page covers the initial investigation and Page 9 has the final results, so if anything on this page disagrees with anything on Page 9 then Page 9 is the one you should follow because I don't plan to come back and correct my mistakes in Parts 1-8.
In short, I found that the Model 3 is already very well insulated and installing additional insulation probably isn't worth the effort.

I reserved a Tesla Model 3 about a year ago and I took delivery of it in October. With a few exceptions, it's a pretty amazing car. There are some software and electronics bugs I'm still trying to get sorted out and the Austin service center doesn't really seem to be up to the task, which is another very interesting problem on its own, but overall it's an incredible machine. It's unlike any other vehicle I've driven. I've heard people refer to it as the iPhone of cars, and I didn't really understand what they meant until I started driving mine. It is the car, rethought, reimagined, reinvented by people who weren't previously car people. It's quite a brilliant creation.

This is my third car, and just like the previous two, I'm upgrading the sound system. Currently all Tesla Model 3s include the premium options package, which includes the premium stereo. In all honestly, the Tesla Model 3's premium stereo is the best factory stereo I've heard. It's way above average. That having been said, it's nowhere near audiophile quality. It is surprisingly powerful and sound remains clear even at high volumes, but both lows and highs are muddled and indistinct. This becomes very obvious when you listen to lossless audio from a flash drive. Also, all sounds below 150Hz are about 5x too loud and the built in 5-band graphical equalizer leaves much to be desired. So I'll be tearing everything out and building a new system from scratch. Luckily, the factory stereo does have 15 speakers, which means we have plenty of options for mounting our new speakers in factory locations.

Before working on the stereo itself, we need to make the car as quiet as possible. That means eliminating interior noise and blocking out exterior noise. Of course we have almost zero powertrain noise (you can hear the gears and power electronics when accelerating quickly, just barely), but we do have significant road noise, particularly tire noise. Wind noise isn't very bad in my car, and is usually well below tire noise. So we're going to line the car with butyl rubber to reduce body vibrations and foam+vinyl (MLV) to block out external noise. This will take much longer than the installation of the actual stereo system, so I'll be documenting it in parts. Part 1 is doors. 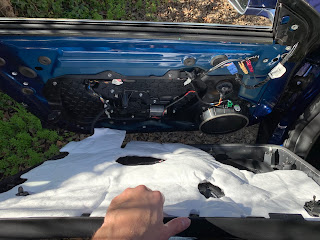 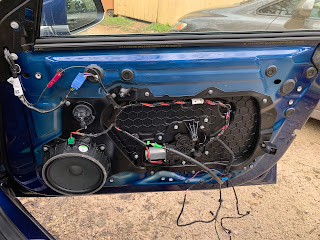 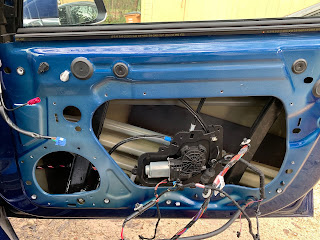 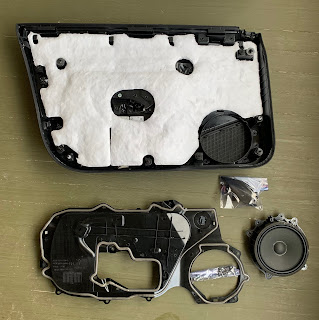 I started out disassembling the front doors, which is fairly easy to do. After removing covers and screws, the inner door pops off and we can see inside. The door contains a fluffy fabric liner that prevents rattling. A black plastic panel covers the outer door's inner panel and, once removed, we find that the outer door outer panel is already dampened with a small amount of some hard dampening material. I decided that there wasn't much point in adding more, so I reattached the outer door inner panel cover. 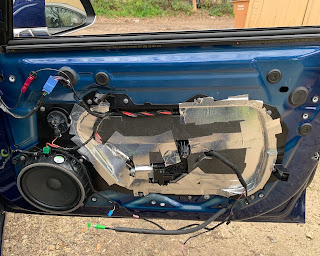 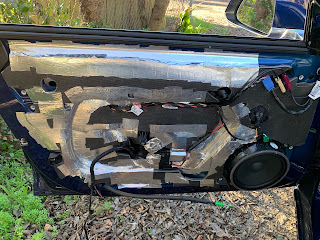 With damping already taken care of, the next step is insulation. I want to line the entire cabin with a solid layer of half-inch-thick foam and MLV, and that starts here. At first I tried to simply cut a sheet of MLV to match the inner door and attach that to the inner door, but this idea was not successful. There is a lot of hardware hidden inside the front doors and clearances are very tight in some places. Finally, I decided to mount the MLV to the outer door instead, which meant cutting many small pieces to fit around every shape. I cut about half a dozen pieces of MLV, fit them around other features, and secured them using aluminum tape. It took about three hours per door, but the end result is close to full coverage with no bulges or straining. 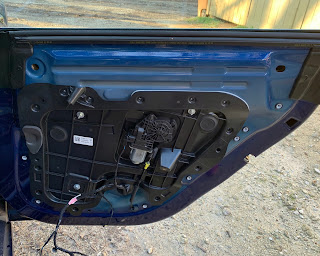 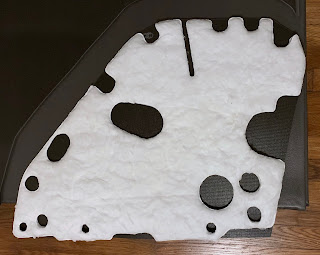 The rear doors were both more and less difficult. Again, we remove covers and screws and then pop off the inner door, at which point we see that the outer door inner panel is covered with a black plastic panel, just like on the front doors. However, on the rear doors, the window drive mechanism is mounted directly onto this black panel. I strongly recommend not removing this panel. I don't know whether or not dampening material is applied to the rear doors, I assume it is, but I would say it's not worth finding out. I have no idea how to put the rear doors back together if you remove these panels.

Other than that, the rear doors were very easy to work with. They don't have nearly as much stuff crammed into them, so there was enough room to just cut a single-piece of MLV and hang it like a curtain on the same clips that hold the fabric liner using zip ties. No problems. Half an hour per door.

The end result is that all four doors are adequately dampened and just about fully lined with a half inch of insulation. That's what I was hoping for. I can't perceive a major difference in road noise at this point, but I didn't expect to. Next up, I'll be lining the cabin.