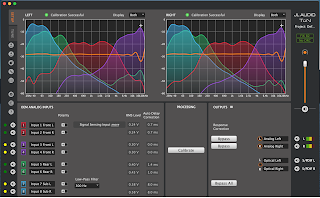 I contacted JL tech support to see what I could learn and they asked for a bunch of data. I sent them screenshots of my auto-tuning results (unfortunately the Fix82 doesn't let you tune manually) and they suggested that I had too much redundant signal. JL said the subwoofer signal and the woofer signals had too much overlap and that was causing the static. So I unplugged the woofers and the music sounded the same and the static decreased significantly, but it didn't go away entirely. Also, now it was localized almost entirely in the left tweeter. The right tweeter was crystal clear 98% of the time. Tech support recommended I wiggle the wires and just re-run the tuning process a bunch of times until I got results I liked. This did not fill me with confidence. 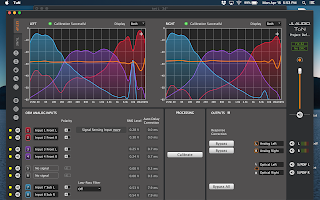 So I re-ran the tuning process probably a dozen times and each time I still had 10kHz static in the left tweeter or in both tweeters. What's more, after several tries, the DSP developed the very strange problem of not reading 10kHz in some channels. JL tech support definitely couldn't explain this, and so we did a warranty exchange. When I received the new Fix82, the static was greatly diminished but still audible in both tweeters. I took my car interior apart and I replaced the cables I used to connect the Fix82 to the OEM speaker signals. I used shielded, grounded cables this time (this shouldn't matter when using speaker-level signals, but I didn't know what else to do). The 10kHz static was still there. I swapped all the inputs around and used different terminals. The static was still there. I moved the grounding point from the chassis bolt that the OEM system uses to the 12V supply's negative terminal. The static was still there. Something weird was happening at 10kHz, it was internal to the Fix82, and there was no apparent way for me to fix it.

I've used quite a few other JL products in the past, including amps, DSPs, and subwoofers, and always I had been very satisfied. I wanted to give JL every possible benefit of doubt, but there was no other explanation. This was just the level of performance that the Fix82 produced. On a lesser system, with speakers that were not as extraordinarily transparent, the static might not have been noticeable at all. But that doesn't help me, so I needed a new DSP. I've used Focal for everything else in this installation and Focal does make a DSP and it has outstanding specs with 24-bit/192kHz sampling, but I downloaded their tuning software and it's surprisingly weak. It just doesn't have many options and configuration tools. I've read around and the consensus seems to be that you can't beat the Helix series from Audiotec-Fischer. So I tracked down a dealer and ordered their DSP Pro Mk2 (which has 32/96 sampling, compared to the Fix82's 24/48). 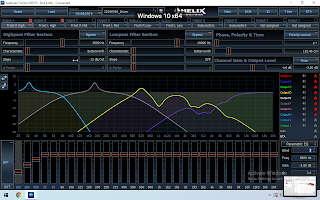 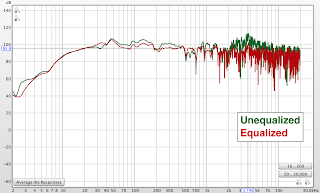 I got an inexpensive calibrated USB microphone and used that with Room EQ Wizard to tune the new DSP. I tuned speakers individually, then made a few adjustments to the system as a whole. It took a while to balance out the highs such that we retained that incredible clarity without making the system too bright. The final results are amazing. I know I've used a lot of words like "unbelievable", "amazing", "fantastic", "glorious" already in this series of blog posts and I worry that the effect has worn off. So let me be clear, this new Helix DSP sounds vastly better than the old JL DSP. Especially after this next, final touch. 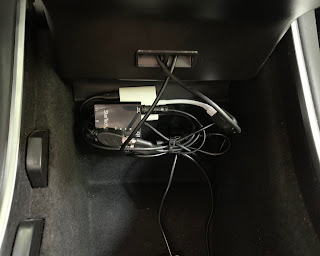 The downside of this unbelievable Helix DSP combined with those outstanding Focal Utopia speakers is that you can hear every single flaw in your recordings. Driving down the road at 70mph, with wind noise and road noise and air conditioning noise, I can still hear the difference between an MP3 and a CD or HD recording. So I needed to improve my source signals. These days music comes almost exclusively from my phone, and in the past that meant streamed over Bluetooth, but that's just not good enough for this system. I did some reading and realized you can pull an uncompressed HD audio signal from an iPhone with the right combination of equipment. Specifically, you can use a Lightning-to-USB converter and then a USB-to-TOSLink converter to get an optical audio signal at up to 192kHz. So that's what I did. That bundle of wires fits in the front compartment of the Model 3's center console and an optical cable runs from there back to the Helix DSP in the trunk. (This video explains how to disassemble the center console.) As for the music itself, I have a decent library of HD files and CD rips, but that's a pain to maintain on a mobile device. I ended up getting a subscription to Tidal, which provides the vast majority of recordings at CD or HD quality. 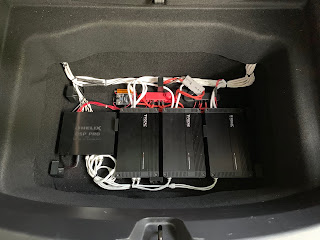 Power works the same as before. The VC_Left turn-on signal turns on the relay+DSP and then the DSP repeats the turn-on signal to the three amplifiers. Car sounds and bluetooth audio work just the same as before. I still have a remote knob up front that controls DSP volume. When I get in the car my phone connects to the car via Bluetooth and starts playing music through the OEM speaker signals which goes into the DSP and plays through the aftermarket stereo. Then I plug my phone into the center console dock and the phone automatically switches to optical output and sound quality increases tremendously. And I retain the use of the steering wheel controls for track control because the phone is still connected to the car via Bluetooth. The clarity is unbelievable. Instrument separation is outstanding. It's a beautiful system. This may be a good place to stop.
audio car Electronics Model 3 Tesla