August 31, 2019
I'm a big coffee fan, as previous blog posts might suggest. And I live in Texas, so there's a large portion of the year where iced coffee is very appealing. But to be honest I haven't found many iced coffees that I actually like. (The exception being Black Blood of the Earth, which is expensive) The traditional method, where grounds are soaked in water for several or many hours, produces a result that is either so light that you can't taste it or so strong that it twists your stomach in knots. And it isn't difficult to figure out why. If you've made your own cold-brew coffee, you've probably noticed that entire flavor groups are absent in the final product. Primarily, aromatics. Fruity flavors, sour flavors, sweet flavors. When you steep grounds in a french press overnight, you end up with the extra-dark flavors and not much else. So if you make a cup of just those dark flavors, and you concentrate them enough to make up for the lack of bright flavors, it becomes overwhelming fast. 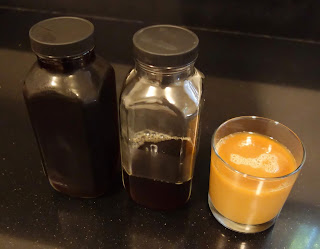 Probably a year ago I started hearing about "Japanese Iced Coffee". I have no idea whether or not it has anything to do with Japan, but I don't care; it's good stuff. The trick to really good cold-brewed coffee is, don't cold-brew it. Brew your coffee hot and then immediately chill it and bottle it to minimize oxidation and prevent over-extraction. The end result is a cup of coffee that is much smoother, gentler, and more flavorful than traditional "iced coffee". And no stomach pains. 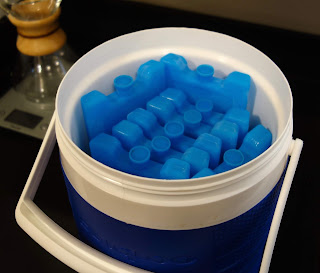 You can produce this style of coffee in a typical kitchen. All you absolutely need is a pour-over setup of some sort, plus a pot and some cold stuff to put into the pot. (Freezing the pot unfortunately is not enough.) You can pour your coffee directly over ice, but ice melts, dilutes your coffee, and decreases your control over the final product. So I recommend getting some plastic-coated ice packs. Other than that, it's pretty straight forward. Brew your coffee, drip it directly into a cooler, filter it again, and then drink it or bottle it.

For regular hot coffee the consensus is that 17:1 by weight makes a pretty good cup. I usually brew at around 12:1 just because that's what I like. For cold brew, I do between 10:1 and 8:1. That's double the strength of normal coffee. So a small cup (6-8oz) cut with a bit of milk or water is all you need for a serving.

I've found that certain beans work much better than others for iced coffee. For aeropress I like Ethiopian beans with a sour, fruity profile, but that doesn't work for iced coffee. The sweet and sour flavors overpower everything else and the cup is just not very palatable. For iced coffee I recommend sticking to chocolatey, nutty beans. Not necessarily very dark roasts, but more chocolate and less fruit. Iced coffee already takes on an intense sweetness that I don't understand, so there's no need for fruity flavors on top of that.

I also recommend filtering your coffee a second time after brewing and chilling. Since it's going to sit in the refrigerator for a week I like knowing I've put extra effort into removing all particulates. 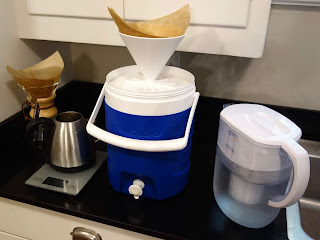 If you want to make a large batch that will last a week, making twenty separate cups is going to be a bit tedious. I recommend putting together a higher capacity system. I drew up an extra-large pour-over dripper that can hold up to 200g of coffee at a time. You can brew an entire bag of beans in two batches, giving you up to 2L of concentrated iced coffee. Additionally, this dripper distributes the brewed coffee through a wide nozzle, instead of pouring it in a single stream. If you pour your hot brewed coffee over your ice or ice packs in a single stream it will quickly cut a hole through the ice and most of the coffee will reach the bottom of your container still hot. The wide nozzle ensures your ice melts evenly. This dripper fits over the top of an Igloo 2-Gallon Cooler. Ice packs go in the cooler, pour-over goes on top, coffee collects in the cooler, and then you fill your bottles from the spigot. That's where I use a Chemex for a second filtering step. Very easy. 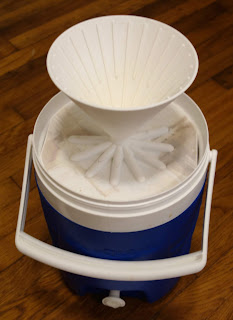 Unfortunately 3D-printed plastic isn't water-tight. So after a few uses it has absorbed some coffee and I don't think it's clean enough to use again. And since it took 60 hours to print this thing, I'm not interested in printing a new one every week. I'll have to see if different print settings can make it a bit less porous. It could also use some stiffening, as the plastic softened and sagged when almost-boiling water was poured over it.

But that's it. The method could use some improvement, but there's no arguing with the results. This stuff is head and shoulders above french press cold-brewed coffee. Full of flavor, (all of the flavor, not just half of it) and doesn't twist your stomach in knots. Try it out.
3D printing coffee