The State of Instant Coffee in 2019

November 02, 2019
I'm always looking for better coffee when traveling or backpacking, and so I'm always interested in instant coffee options. I addressed this subject back in 2017, but a lot of new options have appeared since then and I figured it was time for an update. A decent number of so-called gourmet instant coffees have gone on the market recently, and here I'll compare a few of them, as well as previous bests. 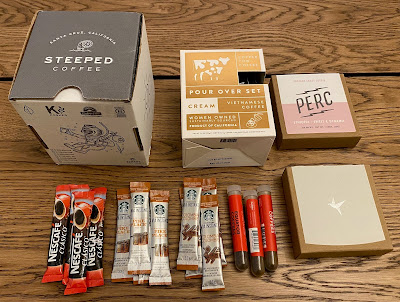 All coffees are brewed with 8oz 180ºF water, unless specified otherwise

You can brew tea in bags. You should also be able to brew coffee in bags. Seems pretty straightforward. The package says to steep for 15 seconds. This is about how long it would take for water to pass through a pour-over setup, so it seems reasonable. But then I put the bag into a cup of water and after fifteen seconds the water is only a very light brown. I decided to leave it for 30 seconds. After 30 seconds it was the lightest, thinnest coffee I've ever seen and it had almost no discernible flavor. I decided to try again, steeping for two minutes. The flavor was still incredibly weak, barely perceptible. This method just doesn't seem to be effective for coffee brewing. The package says you can steep for up to five minutes, and so I tried that, but the resulting cup was still just very weak and flavorless. Maybe if you boil the bag for a minute or two you would get better results, but that defeats the point of calling it "instant".


Ethiopia - Nice full body to it, hint of aromatics, nothing all that distinctive. Surprisingly long-lingering aftertaste. About comparable to 17:1 Chemex pour-over. Pretty good overall. No grain at all in the bottom of the cup. I also mixed one packet with 5oz 180ºF water (instead of 8oz). Very bitter, without savoriness to balance it out. Still not much in the way of aromatics. I recommend sticking to 8oz.

Perc Coffee and Swift Cup Coffee come in the same packaging. That might be because they use the same dehydrator/packager, or it might mean they're the same company. I don't know. Appearance is identical.

Ethiopia - Tastes pretty much identical to Perc Ethiopia. Honestly I can't tell the difference. And that's fine, because the Perc Ethiopia 8oz was decent. Similarly, a bit indistinct, but good. Doesn't have the thick syrupy mouthfeel that you get with fresh aeropress coffee.

Mainstay - Flat. Smooth, but flat. No discernible details. I don't taste any sweetness, sourness, bitterness .... it's a very boring cup of coffee. It's not bad, it's just totally featureless and forgettable. That having been said, it has a stronger aftertaste than any of the others so far, more lingering. But still, very boring.

I reviewed this brand back in 2017, and it appears that their recipe hasn't changed since then.

Pikes Place - Aroma is much stronger than any others. Strongest flavor by far. Strong is nice, but that's just about the only word you need to describe it. It's a very synthetic flavor, chemically. Well balanced, very neutral. A bit of grain at the bottom of the cup.

Colombia - Again, much stronger than other brands. Again, very synthetic tasting. Like a chemist's approximation of coffee rather than fresh beans. The coffee equivalent of an MP3. More acidic than Pike's Place. Notes of sourness, a bit salty, a bit fruitier than Pike's Place but also a bit thinner flavor overall. Again a little bit of grain in the bottom of the cup.


I also reviewed this brand previously. Much stickier than other grounds, maybe they've found a way of retaining oils better than other companies ... this produces clumpier grounds that are a bit more difficult to mix.

Equator Colombia el Limon - Strong aroma, butterscotch and lemon. As I found previously, aroma is much stronger than flavor. But aftertaste is very nice. Body is very thick, very solid. Not bad.

Overall I think these are better than they were when I tried them two years ago. Flavor is still a bit weak, but stronger and longer lasting.


This tastes like a regular cup of fresh-brewed coffee. Because it is a regular cup of fresh brewed coffee. It's technically not instant coffee at all, because it isn't pre-brewed freeze-dried coffee solids; it's just a very conveniently packaged single-serving pour-over system. And it's great. The default roast is an extremely dark french roast, which when brewed with 6oz of water and then combined with half of the included condensed milk makes a really nice Vietnamese coffee. The whole pack of condensed milk is far too sweet for my taste, but I'm sure many other people will like it. I'm interested to try their other roasts, probably without condensed milk. This might not be optimal for lightweight backpackers as you have to carry the hydrated condensed milk (30g per serving) and then perhaps carry the wet coffee grounds as trash. But this is the best of the group.

From worst to best:

Steeped Coffee - I can't really recommend this brand. Results were just not good.

Starbucks Via - It's okay, reliable, available at most grocery stores, but other brands have surpassed it.

Sudden Coffee, Perc Coffee, Swift Cup Coffee - Honestly, it's a tie. These are all decent and personal preferences will determine which one is best for a particular person. I'll probably buy Perc or Swift Cup for future camping trips.

Copper Cow Coffee - Definitely the best overall quality of coffee, but of course that's because it's not actually instant. This might not be ideal for lightweight backpacking, as you'll have to carry brewed grounds and, if desired, hydrated condensed milk, but it's very good coffee. Of course, if you want to do pour-over, you could also just bring your own fresh grounds.
coffee