March 23, 2020
I've come across the same subject on food blogs and food columns and food magazines several times over the past few years. There's a brand of flour called White Lily Flour. Supposedly it is THE flour brand. The only brand used by the true biscuit bakers of the Deep South. Just as real Champagne is made from grapes from Northwest France, real biscuits are made from White Lily flour. Supposedly.
The repeated argument is that White Lily flour produces better biscuits than other brands of flour. Supposedly this is because White Lily flour is made from soft red winter wheat which grows particularly well in the American South, as opposed to the hard wheats used by other brands that grow well in other climates. This soft red winter wheat has lower protein and gluten content, and that results in softer, fluffier biscuits.
I've wondered whether this was true, but I've never found White Lily flour at any store where I live in Texas. Texas is kinda sorta in "the South" for some purposes, but not for this purpose. But it's 2020. You can buy White Lily flour on Amazon and have it shipped to your door for only 4x the regular price. So I did that.
Personally, I don't do much baking. I honestly can't remember the last time I made biscuits. I use flour most often for roux, and occasionally for holiday cookies or cakes. So I'm curious not just about White Lily's ability to produce ideal biscuits, but its effects on other foods as well. I planned to compare biscuits, poached dumplings, and roux-based sauces using White Lily flour and HEB brand all-purpose flour. Here are the results.

The White Lily dough is not only whiter, but also has a distinctly different texture. It's softer, but it also feels flakier. Instead of one obvious large ball of dough that holds together very well as dough normally does, the White Lily dough feels like it will fall apart very easily. It feels more like a ball of wet sand, lot of small pieces pressed together, instead of one large ball of unbroken dough. After five minutes, the exterior feels crunchy, as though it has already dried a bit, even though it's filled with water. 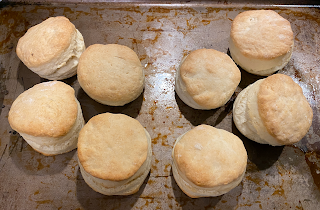 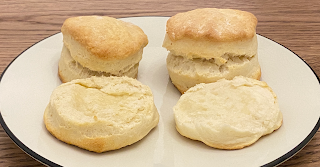 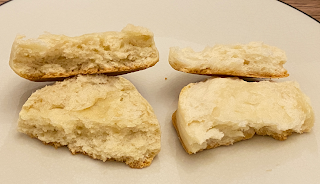 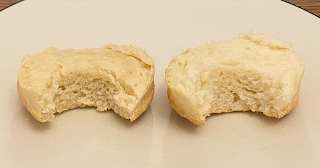 It's difficult to capture the difference with my cheap camera and poor lighting, but there is an obvious difference between the textures of these two biscuits when they're sitting on the plate in front of you. However, there is almost no difference in taste. If anything, I would say the White Lily biscuits have less flavor. The all-purpose biscuits have a very slightly stronger wheat-ier flavor.
If you make biscuits regularly, or aspire to make biscuits regularly in the future, and you're willing to spend $2/lb on flour instead of the normal $0.50/lb, then White Lily flour really does make a difference for the better.

I make Chicken and Dumplings pretty regularly. Since a dumpling is basically just a boiled biscuit, I decided to see what effects White Lily would have here. Oddly, I used the same recipe for both types of flour but I got completely different results. The White Lily dough was not a dough at all. It was far too thin and watery. I had to add in an extra 25% of White Lily flour (by weight) to get the desired consistency. The texture wasn't noticeably different between the two types of flour after poaching. The lighter color of the White Lily dumplings was the only noticeable difference, and even that was minor when coated in chicken sauce.

This was another surprise. As with the dumplings, I used the same recipe I've used dozens of times before but the White Lily batter was far, far too thin. Measuring by weight, I had to add in an extra 30-40% of White Lily flour to get the expected batter consistency. And then the pancakes burned very easily. I had to cook them lower and slower than usual to prevent them from burning. Once they made it to the plate, they had a chewy texture that I wasn't expecting. I guess that's similar to what I experienced with the biscuits. More springy and marshmallow-y than pancakes made with all-purpose flour. In any case, it took an abnormally large amount of effort to cut those pancakes.

So does White Lily flour make a difference? Yes, it does. Baked goods made with White Lily flour have a distinctly different texture and color than goods of the same recipe made with all-purpose flour. Specifically the White Lily items are softer and springier with a springy, almost marshmallow-like feel. They're also much whiter, much lighter in color. In the case of biscuits, this is terrific. White Lily biscuits are wonderful. But White Lily flour didn't work well at all for roux when I tried. It doesn't mix well and it burns very easily. It also gives other baked goods a chewy, springy texture that you might not want. And you'll need to adjust all of your recipes to compensate for the fact that it doesn't seem to absorb as much liquid as all-purpose flour.
So yes, White Lily flour does make better biscuits. But at this point in time I wouldn't buy it for anything else.
cooking food