June 19, 2020
I've now admitted the reality that a hobby car is never "finished". So I should stop using that word. Especially when Tesla can change the car's behavior with software updates. As of update 2020.16.2.1, the VC_LEFT trailer pin that I was using as a turn-on signal for my aftermarket stereo now stays on 24/7. That's no good. I need a new turn-on signal. I could use the cigarette lighter voltage. That's a 12V signal that turns off when the car goes to sleep. However, it stays on for a while after the car turns off, supposedly as long as an hour or so. Since I already have an embedded system that reads CAN data, I figured I could just use that to generate a turn-on signal. Message 0x000C contains the value UI_displayOn, which indicates exactly what you'd expect. So I can use this combined with the diagnostic connector's 12V supply to create a 12V turn-on signal that turns on and off when the car's center display turns on and off. Which is just about perfect.
I do need to create a new PCB and some new code to accommodate this new feature. The CAN library I used previously is hard coded to read one address, and now I'll have to monitor two. And then I need to add in a MOSFET to modulate the turn-on signal. That's all pretty easy to do so hopefully I'll have the system finished in a few days. 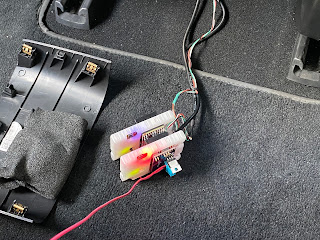 For now I have two PCBs, each reading one CAN address, stacked together sharing one transceiver and power supply. But it works.

I thought about it and it would take hours or days to rewrite that CAN library but the two-board solution works just fine and I've already built it, so I'm just going to leave it as is. I'll change the wiring so that the MCUs are in the trunk instead of on the rear floor, but that's it.