I moved again, into a lovely apartment that has significantly more room than the studio I lived in when I was in grad school. As is often the case when you upgrade, the new apartment is somewhat sparsely furnished. In particular, my bedroom is empty. It has a bed and an iphone charger. This causes me emotional and philosophical discomfort, as I want to be non-materialistic and I'm nauseated by the idea of buying furniture or generic decorations just to fill the space, but then I also don't want to feel like I'm sleeping in a warehouse. After a bit of thought, I came up with a solution upon which all the various parts of my brain were able to agree. 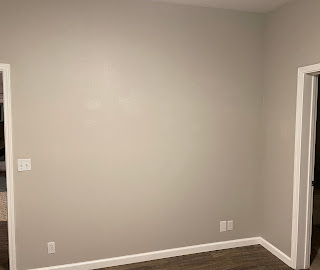 This is what I currently wake up to. I feel like it could be more interesting.

I'm a big fan of green walls and of the idea of building greenery into available space in general and it dawned on me that this was the perfect opportunity to indulge that interest. I could cover the entire main wall of my bedroom with a green wall that would provide both decoration and possibly even a bit of functionality and would likely cost significantly less than tables or shelves that I would then feel obliged to buy things to fill and cover. I actually built one small green wall in the past, a little less than one square meter, five or six years ago. It was not very successful. It had an unnecessarily complicated design and then was poorly maintained. I thought I could do much better on the next attempt.

I started browsing existing solutions online.There are quite a few different ways to build green walls, depending on how you intend to use and interact with them. I was always a fan of extremely dense wallpaper-replacement-style green walls, vast chlorophyll continuums extending from floor to ceiling, corner to corner. Lower density green walls that are typically just lots of potted plants sitting on carefully spaced shelves are certainly easier to implement, but don't deliver the same visual impact. I want a living, breathing wall of green.

If you've considered your options and decided you want a living, breathing wall of green, there are several ways to accomplish this. The biggest bifurcation is whether you want individual plants or a large continuous wall-bed. The easy option is discrete containers. These days you can go online and buy polyester felt curtains covered in little plant pockets for cheap or if you're willing to spend quite a bit more you can buy specially made plastic cups that stack together. The other route is to buy large sheets of low density synthetic felt, quilt two of those together on top of a rigid waterproof backing, and place plants in between the two sheets, with roots growing in between the sheets and leaves growing out through holes in the front. This one-big-bed option takes a bit more work as you have to assemble it all yourself, but has the enormous advantage of significantly lower weight, as there's no soil involved. It seems like the felt bed would also make automated watering much easier, as it could be drip irrigated from a single line at the top of the wall, while pockets would need to be watered from the front. For this first attempt, I decided to go with felt pockets. 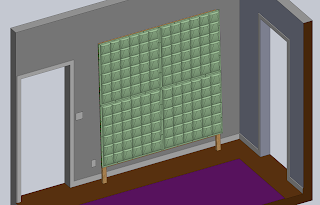 Imagining something along these lines

I drew up a quick concept of my wall. I figured a rectangular frame should be able to support everything, transferring all the load directly to the floor, requiring only a few small wall mounts at the top to prevent it from tipping over. I could use 2x4s or maybe something lighter for the frame, put some sort of waterproof layer on top of that, and hang the pocket blankets on top of that. If the plants eventually grow out to fill in all the gaps and cover the borders, then I won't even need to worry about making the edges look nice. 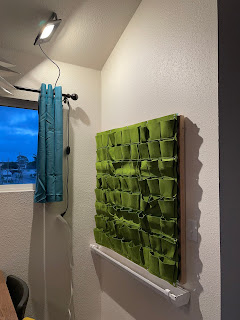 Not wanting to spend several hundred dollars on a full-scale untested design, I decided to start out with a one-square-meter prototype that would go in my kitchen. Same construction methods, only smaller, and wall-hanging instead of floor-standing. This took half a day to assemble and cost about $80 for materials. ($10 for lumber, $20 for vinyl siding, $20 for hardware, $20 for pockets, $10 for gutters) It works exactly as expected. I think I can use this same design for the full-sized bedroom wall, which should be about 2.5m x 2m. 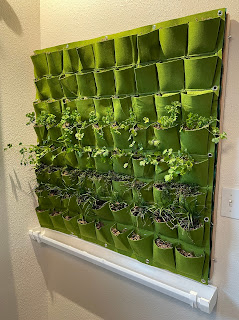 On day two I planted the test wall. I bought a collection of random small plants that might work well in a green wall. (I haven't actually researched this important component yet.) By "work well" I mean fill the space and grow together to hide the physical wall materials. I expect that that will take months to achieve no matter how I do it, so for this first prototype I'm just seeing what will survive with the lighting and other conditions available to me. So I bought a few types of large grasses and drape-y ground covers, as well as seeds for herbs and greens that might be nice to have. (I'll also use plenty of ferns, philodendrons, hoyas, pothos, etc in the future, but those won't fit into the small pockets of the felt that I purchased this time around) The filler plants and parsleys I transplanted into the wall right away. The herbs and lettuces I planted into some rock wool and I'm germinating those on the side. Once those sprout I'll transplant them into the remaining pockets on the wall. 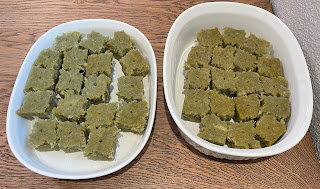 The biggest unknown for me is lighting. My apartment is >60ºF all the time, so temperature isn't that big of a deal, but there isn't much natural light in the places where I can place green walls in my kitchen and there isn't any natural light at all in my bedroom. So I'll have to use artificial grow lights and I'll have to figure out just how many of those I need and how best to mount them. Since the bedroom green wall is meant to be aesthetic, I can't have half a dozen large grow lamps standing in front of it. I'm looking at ceiling-mounted options as well as reflectors to focus their light. And of course I'm also looking at ferns and other plants that don't need much light.

Eventually, after I figure out what plants will grow in my apartment, I'd like to make these walls as highly automated as possible. I'd like to have timed grow lights on the ceiling and timed pumps watering from a hidden reservoir. That seems like it shouldn't be too hard to do. Beyond that, I'm already considering an off-shoot from this project. I built my 1m² green wall as a prototype for my eventual 5m² bedroom green wall and I mounted it in my kitchen out of convenience. Then I thought, why don't I keep a green wall in the kitchen permanently? I'd like to be able to grow certain things in there. Not just herbs, but also lettuce, spinach, kale ... You know what would be better than a green wall for that? Hydroponics. Why don't I build a small, neat hydroponics wall? So that will be v3 or v4.