Okay, this has gone on much longer than I hoped it would. At this point the stereo itself is complete, my car is playing full-range audio every day and it sounds spectacular, but there are a lot of odds and ends I need to clean up. I originally hoped passive cooling for the power electronics would be sufficient, but when I run the system for an hour or more at a time the amps heat up more than I like. So some sort of active cooling is necessary. Also, the relay I installed to isolate the system while the car is sleeping is just inadequate. It was always a stop-gap measure until I designed something better, so now I'm designing something better.

My original idea for cooling the power electronics was a closed loop design where I would mount heatsinks directly onto the car body inside the power electronics space and a circulating fan would mix the air, but after some thought I decided open loop air replacement probably would be more effective. The car's HVAC system is designed to blow front-to-back, with air blowing into the cabin through the front dash vents, from the cabin to the trunk via a port in the rear dash, and out of the trunk through a flap vent on the right side of the trunk next to the OEM subwoofer. (Conveniently this also flows over the OEM amplifier.) So I decided to make use of this existing flowpath. 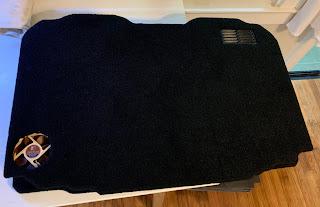 I made a cover for the electronics out of plywood, with two vents cut through and an 80mm fan attached to one of the vents. Printed standoffs keep the cover a reasonable distance above the amplifiers to allow for airflow around the amps. 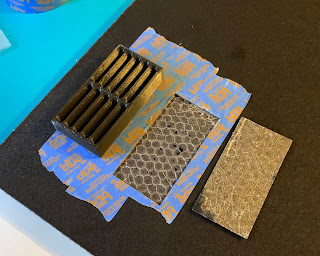 Then I cut two vents through the OEM trunk well cover to complete the flowpath. This cover has an interesting construction. To make it inexpensive, lightweight, and strong, a foam is injected into a cardboard honeycomb and then that is wrapped in fiberglass and carpet. 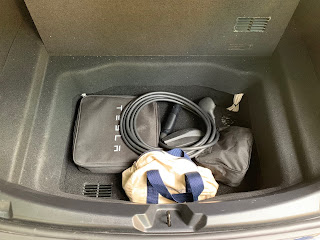 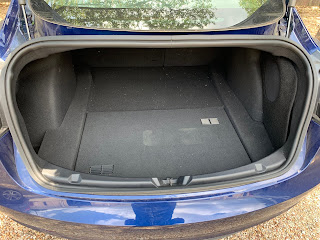 The end result works pretty well. I'm not sure how much of a temperature reduction I'm actually getting with this 5-10CFM fan, but it makes me feel a bit better. I might throw on a more powerful fan at some point in the future if I'm still concerned. It's buried in the trunk, so passengers won't be able to hear it. There's supposed to be a duct connecting the lower exhaust vent to the upper exhaust vent, but I haven't made it yet. And if temperatures are okay over the next few weeks, I probably won't make one.

The second problem still to be solved is power supply control. In the previous post about electronics, I talked about the error messages I got and I explained how we use a relay to isolate the stereo system from the car's 12V power supply when the car turns off. I never figured out on my own what was actually causing my problems because I overlooked a simple detail. I assumed that the main battery's 12V DC-DC converter was always on, but user Jamie Sibley from TeslaOwnersOnline realized that actually the 12V converter stays on when the car is off+awake, but turns off when the car goes to sleep. That means that when the car wakes up, the aftermarket amplifiers are charging up from zero to 12V, pulling tens or hundreds of amps for a fraction of a second. This is what was causing all the protective actions (error messages, car refusing to turn on, all the really fun stuff). Even after I installed the isolation relay, they were still burst-charging when the relay closed and instantly discharging when the relay opened because turn-on signal and power were both being cut at the same time. Now that we know what the problem is, it's trivially easy to fix. A simple charging resistor will solve all of our problems. 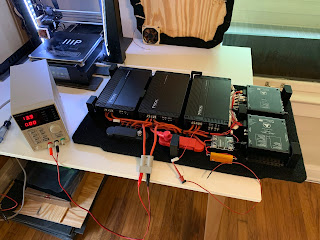 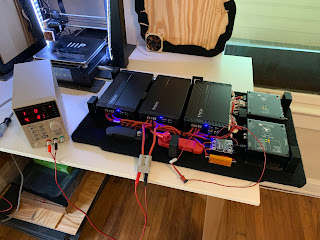 I kept the existing relay in place, though I upgraded it from 20A to 60A, and I bypassed the relay with a 100W, 2.4Ω resistor. This supplies power to the amplifiers at a limited, controlled amperage when the relay is open. So after the car wakes up but before it "turns on", the amplifiers charge at ≤6A. It takes less than one second for them to charge all the way up. Additionally, after the car "turns off" but before it goes to sleep, we maintain up to 6A to the amplifiers, which eliminates the "pop" you sometimes get when you cut power to them instantaneously, which is really not good for your speakers. You always want to turn amplifiers off using the turn-on signal, not by cutting the power. I also threw in a proper disconnect, just for convenience and cleanliness. So I'm going to say that this problem is solved. 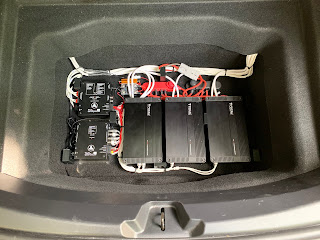 Last of all, I needed to mount the remote control knob for my DSPs in the front of my car. I tried out a few different arrangements before deciding that mounting it onto the bottom of the main display was the best option. It's conveniently close but also unobtrusive. I printed a mount to hold the knob and used 3M adhesive strips to connect it to the display. It works beautifully. 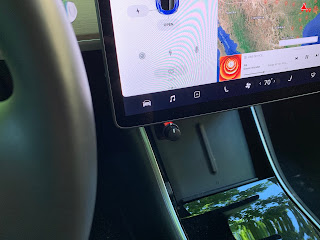 I'm still tuning my amps and DSPs pretty regularly, and that will continue for a while until I decide I can't improve the tuning any more, but other than that my stereo is finished. I have all of the functionality I wanted and it's safe and automated and all the bugs I know about have been taken care of. I'm going to write up a summary sometime soon that should contain all of the reverse engineering info I picked up as well as a complete overview of my work so anyone who wants to learn or follow along doesn't have to slog through all the disorganized mess I've written in the past eight posts.