Part 1 was where I really didn't know what I even wanted. Something big and green ... Part 2 was where I decided to go big but still didn't really know what I was doing. Confident I could do it but not sure how long it was going to take. In Part 3 I showed how clever I was by designing and building from scratch my own automated watering system. Hooray for me. I always think of unnecessarily complicated robotic solutions first. It worked perfectly for a few months, but I didn't use fully sealed bearings and eventually the bearings rusted and seized. On top of that it was always noisy and sprayed water everywhere because it used a 3d printed seal. So I threw that out and just bought 13 CoTS solenoids valves. They cost $5/each. I printed a frame to hold them all together and the entire watering system just got so much simpler and more reliable. Whenever they wear out, I have a box full of spares because they only cost $5. This also let me simplify the control code quite a bit. 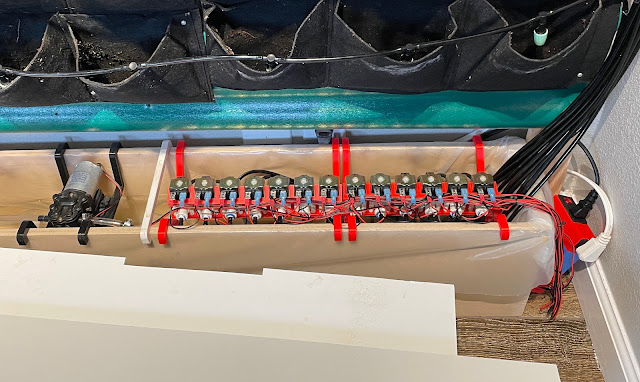 I also replaced the tupperware container I was using as a water reservoir with a custom-built tank. I just screwed together some plywood into a box and dropped in a plastic liner. The old tupperware container held two or three gallons, which was fine when I had twenty plants. With 200 plants, that wouldn't be enough to water the wall once. The new tank holds ~13 gallons and only needs to be refilled about once a month. I made a cover out of PVC panels to go over the tank so water can drip down along the full length of the wall and flow directly into the reservoir, but the reservoir is completely shielded from light to prevent algae growth. Then my wonderful girlfriend Julie painted a mural on it. 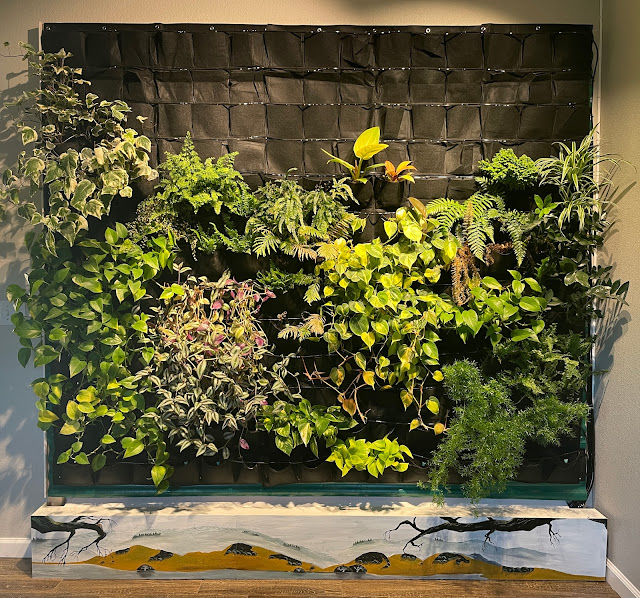 That's where I am today. The lighting system was easy to build and I haven't thought about it since I installed it over a year ago. The watering system is finally fully automated and very reliable. And knowing that, I'm finally ready to fill up the whole wall. I didn't want to plant 200 plants and then have the watering system break down on me. It'll take a while more to fill the wall completely, but I'm pretty happy with where it is today. I want a green rainbow. Green everywhere, no flowers, no reds or yellows, but a hundred different textures. I just added in some asparagus ferns, maiden hair ferns, fluffy ruffle ferns, ivy, and some weird looking little plant that I can't remember the name of but it looks really cool. Another one or two additions like that and the wall will be complete. Things I want to improve include finding a quieter pump and looking for a clean way to mist the ferns that doesn't protrude significantly from the wall and doesn't get water all over the floor.